WINDSOR – Bourbon whiskey is still booming across the country, and Pappy Van Winkle is supposed to be the hottest bottle of the stuff there is around.

Now, in a county that just voted in liquor-by-the-drink sales this past November, Bertie County wants to get out-front on the sale of one of the rarest whiskeys in the country.

When the fall distribution was announced by the state Alcoholic Beverage Control (ABC) Board, only a lucky few liquor stores statewide will get access to the rare hooch.  Bertie County’s lone ABC store in Windsor was one of the ‘lucky’ ones. 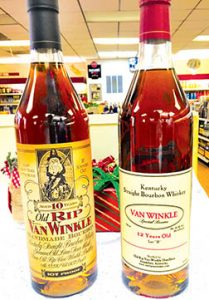 Two rare, select whiskeys will go on sale soon at the Bertie County ABC store in time for the holidays. It’s the first time such specialty spirits have been available in northeastern North Carolina. | Photo courtesy of Bertie Co. ABC

“Pappy Van Winkle is a rare Bourbon and usually the Commission only allows Raleigh or Charlotte have the limited supply, but the Bertie County Board lobbied the Commission, saying small poor counties should have the same opportunity,” said Bertie County ABC Board Chairman Miles Davis. “Rarely, if ever, does anybody in northeastern North Carolina get these bottles for the simple fact (of the Commission’s idea) people in counties like these not being able to afford it.”

It seems the bourbon, sold by the Old Rip Van Winkle Distillery company in Kentucky, is too popular and too rare to keep on shelves.

Counties like Mecklenburg, Forsyth, and Wake pulled it from their stores several years ago, now storing its yearly or twice-a-year shipments at the state’s central warehouse in Raleigh.

There’s good reason for that: a fifth (one-fifth gallon) of 20-year-old Pappy sells for $149 in Wake County; and that’s cheap compared to what it sells for online. The same vintage is listed for $1,000 in local postings to the website Craigslist, which has been known to serve as a black market for illegal liquor sales.

“The only people who can buy that bottle are going to be people who can prove they live in Bertie County,” Davis added; putting a damper on those who entertained ideas of sending “Uncle Joe” up from, say, Fayetteville, to buy some. “If I didn’t say that and the local board said that then you’ve have people coming to buy it from as far away as Virginia.

“We were allocated a certain number of bottles,” Davis maintains. “And I can tell you, when we put them on the shelf they’ll be sold in one day because everybody’s heard that we’ve got them; they’ve been calling us.”

Each fall, the manufacturer, ships the sweet, stinging nectar from a Kentucky warehouse to distributors across the country.  Estimates put the yearly output at about 21,000 bottles of liquor, ranging in age from 10 years or higher.

In North Carolina, the state alcohol board got about 1,100 of those bottles in 2014.

Davis says the price his store is charging is no special discount. The Bertie County ABC store follows the same pricing statewide and is generally the best deal on this sort of thing.

“It’s so rare that any distilled alcohol like Pappy Van Winkle ever gets to Bertie County,” laments Davis. “We’ve asked for years and we’ve never been able to receive them, and no county in this area was able to receive them.  The closest (before this year) that Pappy Van Winkle was sold in eastern North Carolina was in New Hanover County, and they have a lottery people have to enter to see if they get an opportunity to buy.”

At private shops in some of North Carolina’s larger more upscale cities, the price can be significantly higher — be prepared to add $100 to the price tag.

“If the state ABC system was privatized – as some feel it should be – no store in the area would carry the specialty brands that Bertie County does,” Davis warns. “We’re not having a lottery.  The first Bertie County citizen who comes in and wants a bottle is going to be able to purchase it.

The News & Observer says in terms of taste, there is a huge difference between the different types. The 20-year, for example, is only a 90 proof, and tastes almost like you’re sucking on maple syrup. It’s smooth. The 15-year is 107 proof and packs some punch. The 12-year-old goes back down in proof, and the 10-year-old is back at a higher proof.

“If (liquor) sales were privatized, then Bertie County would never have this opportunity,” Davis emphasized. “Food Lion or Walgreens would only be selling certain brands; they wouldn’t have the variety that your local ABC store has: to get a rare distilled spirit as we’re giving our citizens shows we’ve got the best system in the nation.”

WINDSOR – Another go-round. In a split vote Monday night at the Bertie County Board of Commissioner’s meeting here, John... read more