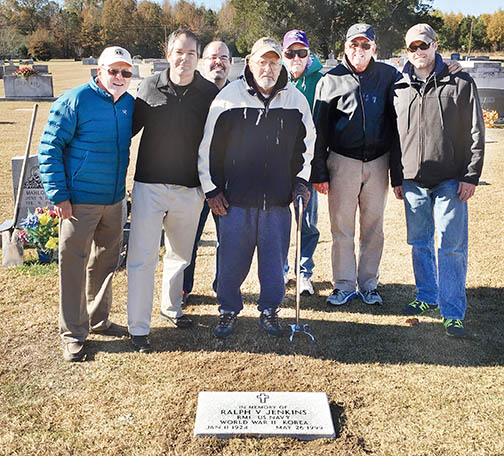 Members of the Jenkins family in attendance at the installation of the VA Memorial Marker in honor of the military service of Ralph Jenkins, were, from left, Steve Jenkins, Andrew Jenkins, David Jenkins, Michael Jenkins, Charles Jenkins, Jerry Jenkins, and Scott Jenkins. | Contributed Photos

RICH SQUARE – Ralph V. Jenkins was just a simple farm boy from a small, rural town sent off to face an enemy he did not know.

And he did it twice! 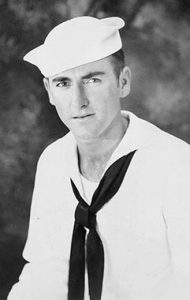 Jenkins served in the United States Navy aboard the USS Knox (APA-46) as a Radioman during World War II in the Pacific Theatre. The battle group to which he was assigned faced the tough task of “island hopping” from Saipan, to the Philippine Sea, to Leyte, and to Iwo Jima.

His ship was responsible for ferrying troops ashore during the landings. Jenkins witnessed first-hand some of the largest scale battles in which the Navy was involved.

Jenkins also enlisted again with the Navy during the Korean War.

“I remember the stories he would tell when I was young about service aboard the ship in combat during World War II,” said his grandson Scott Jenkins who resides today in Pottstown, Pennsylvania.

“He saw Kamikaze attacks and thousands of casualties. He said going ashore to gather casualties during Iwo Jima was especially emotional,” the grandson added.

The loyalty and service/duty to country put forth by Ralph Jenkins was once again on the minds and in the hearts of his surviving family members recently when they made their way back to Rich Square.

They gathered on a bright, sunny day at Cedar Lawn Cemetery, located on the outskirts of Rich Square, to honor Ralph V Jenkins with a Veterans Administration (VA) memorial marker.

Ralph Jenkins passed away in 1999 and family members scattered his ashes.

“We never procured the traditional VA headstone or marker as we had no remains to bury,” stated Scott Jenkins. “Because I work for the Department of Veterans Affairs, I knew we could secure a memorial marker, but as is so often the case with our hectic lifestyles, we kept putting off having it installed.”

Scott said with his father’s (Michael Jenkins, the son of Ralph) and his uncle’s (Charles Jenkins, the brother of Ralph) blessings, he submitted the VAF 40-1330 to a funeral home in Rich Square (Garrett-Sykes Funeral Service) to assist with the process.

“The Vice President and General Manager of the funeral home, Scott Sykes, personally installed the marker while we observed. He was very moved by the event and was honored to help us,” noted Scott Jenkins.

“Coordinating with my family scattered all around the country, we met at the cemetery in Rich Square on Monday, Nov. 21 to unveil the stone and observe the installation,” Scott continued. “His marker was placed next to his parents and brother in the family plot.”

Scott added that while his grandfather was born and raised in Rich Square, he was living in Myrtle Beach, SC at the time of his death.

“I was especially close to my grandfather growing up and I know how especially proud he was of his service in the Navy,” Scott said.

Ralph Jenkins was born in a small shack on Bolton Road in Rich Square, as were his two brothers, Charles and Willard (the oldest of the three). Another child, Robert Jenkins (who would’ve been the oldest) died when he was approximately 12 months old.

“From what I understand, my grandfather worked a lot on the family farm on Bolton Road,” said Scott. “At some point in his teenage years he got a job as a school bus driver for the local school in town. He attended the main school in Rich Square until the 11th grade when he decided to move to Norfolk, VA where he worked for A&P Grocery. It was there that he was drafted in to the Navy in 1943. He obtained his GED while in the Navy.”

Scott said Ralph Jenkins married Irene Holland Jenkins in 1945 in Maryland and the couple resided there for many years before moving to Pennsylvania.

However, Ralph Jenkins wasn’t the only member of his family to serve their country in the military.

Charles Jenkins, who will celebrate his 86th birthday at the end of this month, was born and raised in Rich Square and graduated from the main Rich Square School before enlisting in the Marine Corps at age 18.

As a Marine, Charles served in the Marine Barracks in Washington, DC where his responsibilities included funeral details at Arlington National Cemetery, security details at the White House (where he met/guarded President Harry Truman and later Vice President Richard Nixon) and other ceremonial duties associated with the Marine Barracks there. He achieved the rank of Corporal.

As an adolescent and teenager, Charles worked the family farm with his father and brothers in Rich Square. He never returned to live in Rich Square after serving in the Marine Corps and has resided in Westover, Maryland for many years now.

Michael Jenkins enlisted at age 18 and served in the Marine Corps for four years. He went overseas to Okinawa for one year, helping to supply the troops serving in Vietnam.

Michael later served as a Corrections Officer at the Portsmouth Naval Prison. He achieved the rank of Sergeant.

Scott Jenkins enlisted at age 18 and served in the U.S. Army for five years as a Combat Engineer. He served overseas in South Korea at Camp Howze with the 2nd Infantry Division for one year to include a special detail along the world’s most heavily fortified border, the Korean Demilitarized zone (DMZ). There he served alongside allied South Korean troops only a short distance from enemy North Korean soldiers.

Later, Scott served at Fort Carson, Colorado with the 4th Infantry Division and then finished his service in the Delaware Army National Guard. He achieved the rank of Specialist (E-4).

Scott added that it was interesting to note that his grandfather served in the Navy, his dad in the Marine Corps and he in the Army, all three different branches.

Meanwhile, Jerry Jenkins (Willard Jenkins’ son and Ralph’s nephew) was also born and raised in Rich Square. He worked on the family farm throughout his childhood and graduated from the same school where Ralph and Charles attended.

The farm he worked was Willard’s farm, which was handed over to him by his own father when he became ill and could no longer work it.

After graduating from the Rich Square School, Jerry worked as a North Carolina State Highway Patrol Trooper from where he retired.

RICH SQUARE – For the past three years, WRCS 970 AM sponsors a gospel music concert that serves as a... read more