Next month, Bazemore will “cash in” in another big way when he attends a retirement ceremony in his honor at his alma mater, Old Dominion University, in Norfolk. 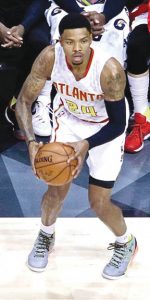 At the halftime ceremony of the Virginia Commonwealth-ODU basketball game at the campus’ Ted Constant Center on Dec. 10 Bazemore’s number-24 jersey will be formally retired and raised to the rafters, there to hang in immortality.

“Wow, this is truly an honor to join such a pristine list,” Bazemore told the Norfolk Virginian-Pilot in a news release. The announcement was made by the school back in October.

“This is an amazing day,” he continued. “I really appreciate everything Old Dominion has done for me. I will always be a Monarch for life. I am speechless right now.”

Bazemore, who came out of that tiny hamlet nestled in the northwestern part of Bertie County, helped lead ODU to Colonial Athletic Association titles in 2010 and 2011 and two appearances in the NCAA Tournament. He graduated in 2012 with degrees in criminal justice and human services.

Bazemore ended his run in Norfolk having scored 1,416 points in his four-year career and went on to help account for a school-record 101 wins.

Undrafted out of ODU in 2012, Bazemore broke into the NBA with the Golden State Warriors. He was traded to the Los Angeles Lakers the following season and signed with the Hawks before the 2014-15 season.

With the Hawks, Bazemore has started 13 games this season in Atlanta, and 78 in his two previous seasons, when he averaged 10.6 points, 5.1 rebounds and 2.3 assists per game.