ASKEWVILLE – The Lady Rams of Ridgecroft School squared up against the Lady Warriors from Lawrence Academy here late Saturday afternoon Nov. 19 in the championship round of the 5th annual Eric Baggett Memorial Tournament at Bethel Christian Academy.  The tournament serves as a basketball season kick-off for Ridgecroft School, plus Lawrence, Northeast and Bethel Academies. 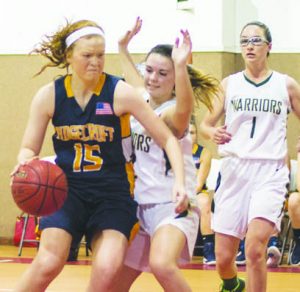 In Saturday’s ladies’ championship game, the Lady Rams finished off the Lady Warriors 40-26, but getting there wasn’t easy.

In the first half, the score was tied on the board five times total as Lawrence tried to get on top. Ridgecroft led 8-6 going into the second quarter when Ruthie Daniels hit a basket a few seconds in, but Lawrence’s Lauren Baker also scored less than a minute later, making it 10-8.

The Lady Rams’ Mackenzie Brown got off a shot halfway through the quarter but was followed by a basket from Lady Warriors’ Katlynn Stotesberry and another by LAW’s Brinson Edmundson, tying the score at 12-12.

Ridgecroft took off from there, with two baskets from Daniels and one by Brooke Rose to give their team the lead of 18-12 at halftime.

The Lady Warriors were never able to get close again, however, scoring 14 points to the Lady Rams’ 22 in the second half, including a 3-pointer by Ridgecroft’s Rose to start things off at the beginning of the third quarter and another by her to finish the game.

In the varsity boy’s championship matchup, the tables were turned as Lawrence toppled Ridgecroft 64-51.

The Warriors took an early lead in the first quarter, as senior Austin Wynne got things going with a basket a few seconds in and senior Jarrett Harrell hitting a trey a minute later, making it 5-0, LAW.

Ridgecroft’s Wyatt Livermon answered with a basket, but Lawrence’s Miller Trowell countered with a three-pointer, bringing the score to 8-2.The Rams’ Jasper Krueger and Ben Cooper sank consecutive baskets and narrowed Lawrence’s lead to just two points, but a string of baskets by Lawrence went uninterrupted the remainder of the quarter except for two Krueger free throws, giving Lawrence a sizable lead of 17-8 at the end of the quarter.

After the end of the night’s games, players, coaches and parents from all four teams gathered for the tournament’s awards ceremony.  Three $750 scholarships were given out; those recipients were Will Bazemore of Bethel, Joshua Byrd of Northeast, and Lauren Harrell of Ridgecroft. Four $500 scholarships were also awarded, to Mackayla Vaughn of Bethel, Sydney Wilkerson of Lawrence, Haley Jilcott of Northeast, and Mackenzie Brown of Ridgecroft. 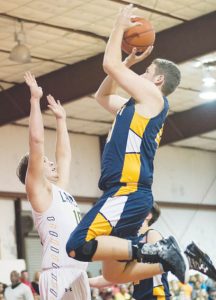 INSTITUTE, WV – The Chowan University women’s basketball team opened the 2016-17 season with a pair of wins in the... read more