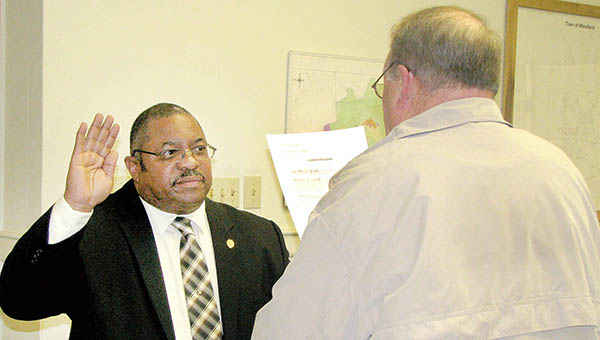 WOODLAND – The Town of Woodland swore in its first Black mayor Thursday night.

Not only is Manuel the town’s first Black mayor, he has been living in Woodland less than two years.

He overcame those obstacles by going door to door to meet the townspeople, get to know them, and listening to their ideas about revitalizing the Town of Woodland. 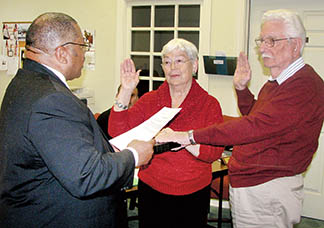 He and his wife, Pattie, moved to Woodland in Jan. 2014 from Neptune, NJ following his retirement as a U.S. Probation Officer.

He thanked the voters for electing him mayor even though he was not well known.

“I started going door-to-door. I met a lot of people and received a lot of encouraging feedback,” Manuel said. “I’m so thankful and grateful to all of them for having voted for me and for all the support.”

He added, “I look forward to all of us coming together as a community and working harder to make Woodland a stronger and more united community.

“I’m so honored,” Manuel said. “It’s got nothing to do with being the first Black mayor. What I’m concerned about is trying to help make a positive difference.

“The fact that I am the first black mayor,” said Manuel, “is an honor in and of itself knowing the history of Woodland and this area of the country, but times change and people change and this shows that if people get to know people as individuals, they realize they don’t have anything to fear; that we’re really all the same.”

He acknowledged that he had many strikes against him when he decided to run for mayor, but he wanted to see the town come together and start becoming a single community of Woodlandites instead of several different communities that didn’t work together of play together.

“I’m not from around here, I’m married to white woman, I’m from the north, and wasn’t part of the community,” Manuel said, “all negative hurdles I had to overcome. I overcame them by meeting with people.

“I had to step out in faith,” Manuel said. By going all over town, meeting and talking to people, many residents got know him and liked his vision of people coming together for the good of the town.

He praised his predecessor, Mayor Garris, for the things he did to help the community and the way he conducted Town Council meetings.

“Mayor Garris is certainly due a lot of respect and should

be commended for the work he has done,” Manuel said.

Manuel said he has never been a politician, but has always been active in his community.

He also praised the form town council and current council for their commitment to the town.

“I look forward to working with all of them,” he said. “We will be working together to take Woodland to the next level. That next level for me is making Woodland more attractive, trying to build more community spirit here, and trying to get people to know more people, not just the people they’ve known all their lives.”

He wants to reduce crime in Woodland and will be working with law enforcement and people in the community.

As a former federal probation officer in some of worst communities of New Jersey, believes he can help the town safe.

“We have to get more positive things going on here.” He said. “Together we can make those positive changes.

“We are very pleased to be members of the Woodland Community,” he said. “Everyone we have met has been very cordial and warm and for that, we are greatly appreciative.

“While speaking with some of the people that we met, many of them mentioned the fact there are very few community events in our town, Manuel said. “We are particularly concerned about the apparent lack of activities for the children of Woodland. We would like to get involved with the members of the Town Council and other community members, in an effort to identify some possible events and activities that may help to infuse a greater sense of community for citizens of all ages.”

He and his wife organized a successful craft fair this past Saturday and he hopes he’ll be able to start thing like Christmas parades of other activities that will keep people interested in the town and strengthening the community.