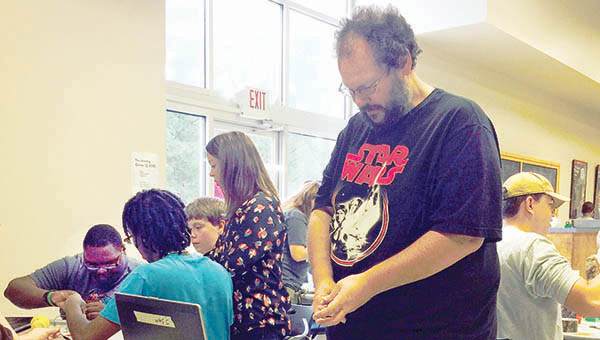 Paul Hollingsworth (right) tinkers with his ‘invention’ of Play-Doh and other household materials at the ‘MaKey-MaKey’ during Maker Faire held at Hertford County Early College High School on the Roanoke-Chowan Community College campus. | Contributed Photos

Many children gathered at this fall’s event for the excitement and fun of creating and learning many new and different things. The event can be used in all subject areas, but it is tied to the Science, Technology, Engineering, and Math (STEM) curriculum.

The program is designed to help children learn about the different uses of technology and to be able to build these technologies on their own.

Students got a chance to play Minecraft on the Raspberry Pi. Minecraft is a game where participants use the placement of blocks to build anything you can creatively imagine.

They also hacked toys by making them their own. Other activities included completing bookbinding, making duct tape wallets, and participating in many other creative activities. 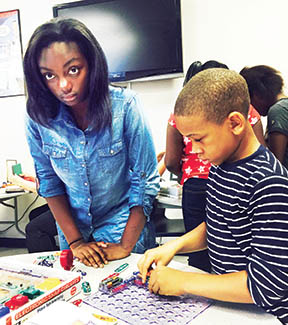 Jennifer Smyth, an English teacher at Hertford County Early College High School, was the host this event, and worked with children at the bookbinding station.

“It’s always a joy to put on the Maker Faire in partnership with the Hertford County public schools AIG program,” Smyth said. “It’s fun to watch students of all age levels work together to play, make, create, and discover new things. Sometimes we need the reminder that learning is fun.”

The students also communicated their appreciation for the Faire’s activities.

“While at the Maker Faire, I loved listening to Ms. Smyth as she gently nudged students to use their creativity and to push themselves to try something new,” said student Terri DeCresie.

Many children I talked to from Ahoskie Elementary were overjoyed by how much fun they were having and I asked many if they would come back and if they were enjoying the time spent at the Maker Faire. They all said they had a great time and that they would love to come back.

Many of the volunteers at the event were also students from HCECHS.

“It was fun and there was so much to do and I enjoyed hacking the toys,” remarked volunteer Steven Hollingsworth. “The toy hacking station was about each person expressing themselves by “remixing” the toys into what they wanted them to look like.”

“The Maker Faire was amazing and I had a fun time doing it because I saw things I would have never thought of,” said Ashonti Thompson, a cardboard station volunteer.

ECHS sophomore Colin Vaughan summed up the value of the experience.

“It feels good to be a part of the Maker Faire because it gives me a chance to meet many different people doing many different things,” Vaughan said. “It may be an event held for the children, but the teens and adults that attended enjoyed it just as much.

The next Make Faire event is planned for the spring of 2016. We hope to see you there!