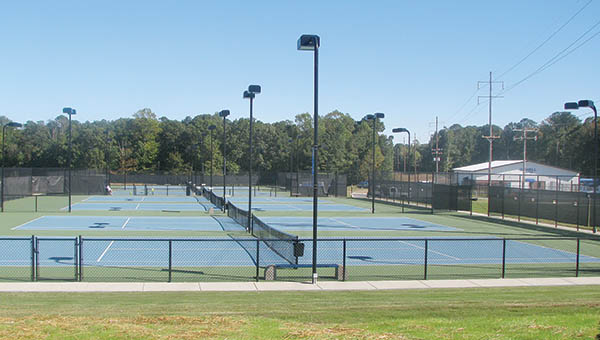 MURFREESBORO – Chowan University held the official dedication ceremony for the new state-of-the-art Rose Family Tennis Complex on Oct. 10. Named in honor of the Rose family of Ahoskie, the world class courts are the latest in a round of significant campus upgrades to the university’s athletic facilities that are changing the face of this historic campus.

“This tennis facility is the envy of almost everyone who comes here. It’s a facility that assists in recruiting high quality players, and it’s a facility that changes the landscape of our campus,” stated CU Athletic Director Ozzie McFarland at the ceremony. “Our athletic programs and facilities have had major upgrades in the last few years, and the Rose Family Tennis Complex is at the top of that list.”

“This is a jewel of a facility. The amount of enhancement this makes to the campus is immeasurable. There is nothing like it around,” Head Tennis Coach Chris Stambaugh reiterated as he added, “The eight lighted courts are quite beautiful at night, by the way. It’s like some kind of shrine to tennis.” 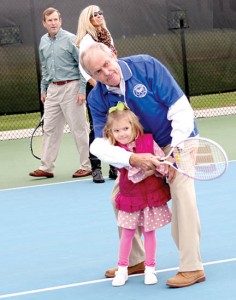 Stambaugh showcased the newly constructed pavilion next to the eight Chowan blue courts, pointing out the open air patio, the two bathrooms and the large storage area.

“This complex will benefit the school, the tennis team, our recruiting program and this whole community for years and years to come,” he noted.

Chowan President Dr. Chris White reminded the audience of how things used to look at Chowan and how much progress has been made on campus.

“Twelve years ago, the administration, in an attempt to save money, discontinued tennis. The six old courts were left basically abandoned. That’s what we found when Linda and I came here,” he said as he explained how tennis was now reborn. “Gary Whalen of Whalen Tennis Company is the professional who helped build these new courts. He is probably the best known and respected tennis court builder that can be found, and these are the best courts that can be made, the best lights, the best fencing and so on. Even our logo was inspired by Wimbledon. If we are going to be first class, let’s be first class all the way!”

Throughout the day’s ceremony were repeated references to the generosity and support of Frank Rose, the Rose family and Rose Brothers Paving Company for whom the complex is dedicated. At the ceremony’s opening, a special presentation of the North Carolina Baptist Heritage Award was given to honor Frank and Penny Rose as a couple who embodies caring.

Dr. White remarked, “They are fine people, examples of being successful but being willing to share that success with others” as he mentioned their many contributions to the area including Ridgecroft School, the Boy Scouts, historical preservation, Ahoskie Baptist Church, the Women’s Club and the many other organizations that benefit from the Rose family’s legacy of unbound philanthropy.

“I think I speak for the tennis team and the entire Chowan community when I say we deeply appreciate the support, incredible generosity and the expertise of Frank Rose and the Rose family,” Stambaugh said poignantly. “It must be noted that these individual’s kindness is on another level. It is a rare trait and we are very lucky and blessed to have them here.”

After an introduction of the men’s and women’s tennis teams – whose players hail from across the globe like Spain, Germany, Mexico, Brazil, Russia, Canada, Poland, Argentina, and even Azerbaijan – the man of the hour had a chance to address the crowd of family and friends, expressing the family’s long love of the sport.

“Tennis has been an important part of our lives for many of us in the Rose family for a long time,” stated Frank Rose. “Larry, Jeff, Tim and I have built many tennis courts over the years. Penny and I have played tennis a long time. My sister-in-law Sue plays tennis competitively. My son Chip played college tennis. My future daughter-in-law, Taylor Futrell, played college tennis. My grandson Dawson plays tennis for Ridgecroft. Our granddaughters are learning the game and they love it. So we are a tennis family. Tennis is a great sport, one you can play your entire life. It teaches character and discipline. It even tests your religion at times.”

W. Frank Rose Jr. of Ahoskie is a longtime supporter of Chowan University, serving previous terms as a Trustee since 1987. He is currently Chairman of the Board of Trustees. The Rose family has also been very generous to Chowan with establishing endowed scholarships and making donations and gifts in kind.

To learn how you can support the growth and development of Chowan University, contact Vice President for Development John Tayloe at tayloj1@chowan.edu or (252) 398-1232.