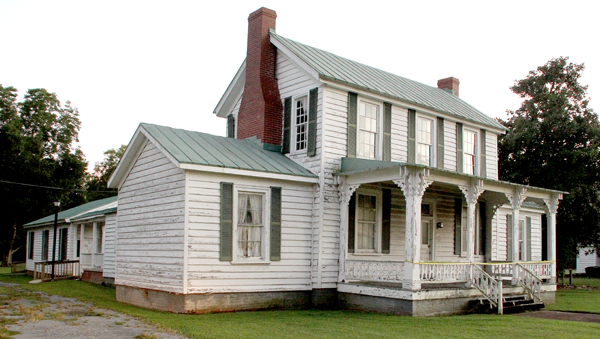 This property along Main Street in Murfreesboro, once the home of Dr. Walter Reed, will soon return to the ownership of the Murfreesboro Historical Association. Dr. Reed is famous for conquering Yellow Fever. Staff Photo by Cal Bryant

WINTON – In October of 1977, the County of Hertford purchased the Dr. Walter Reed home from the Murfreesboro Historical Association (MHA) for $10.

Nearly 38 years later, that structure – which is on the National Register of Historic Places – is in the process of returning to MHA ownership. The cost…..$10.

Lamar VanBrackle, MHA president, informed the Hertford County Board of Commissioners at their meeting here on Tuesday morning of the organization’s intentions to renovate the home.

“We would be most pleased if you would convey ownership of the Dr. Walter Reed home to the Murfreesboro Historical Association and we will do our very best to restore it and in accordance with the National Register,” VanBrackle said. “We want to make this home something that Murfreesboro and Hertford County will be proud of.”

While it’s not fully known why the MHA sold the property back in 1977, Hertford County did use it for years as one of its nutrition sites for elderly citizens before moving it to another location in Murfreesboro.

“We’ve worked on this project for several months, to convey the property back to the Murfreesboro Historical Association,” said Commissioner Johnnie Ray Farmer. “We’re happy to see that this effort will come to a satisfactory end for both parties, especially for the Historical Association as they move forward in their preservation of this historic home.”

Over the years, Hertford County attempted to maintain the property, which was constructed prior to the Reed family living there in the 1850’s. That effort became burdensome and expensive.

According to Chuck Revelle, legal counsel to the county commissioners, the county can convey property to a historic preservation organization without charging the current market value.

“There are state statutes that allow you (commissioners) to do this, provided you put certain covenants in the deed to where the property will be maintained for its historic purposes,” Revelle said at Tuesday’s meeting.

Revelle presented a resolution containing covenants to the commissioners for their consideration. Those covenants include that the MHA shall preserve and enhance the historical nature of the portion of the site that is listed in the National Register of Historic Places; the MHA shall limit the alteration of interior or exterior features or appearance of the historical part of the structure to be consistent with requirements to maintain its listing on the National Register of Historic Places; and the MHA shall not take any action detrimental to the appropriate preservation of the historical structure.

As required by state law, that resolution must be published in the newspaper of record for Hertford County (the Roanoke-Chowan News-Herald) prior to the signing of the deed to convey the property from county ownership to the MHA.

Revelle noted that the back portion of the home, an addition built to expand the nutrition center, is not part of the National Register of Historic Places. Therefore, he said, the MHA is not required to maintain that part of the house in any particular manner.

“They can make what is referred to as adaptive restorations,” Revelle noted.

The commissioners approved the newspaper publication of the resolution. They may approve the final sale of the property to the MHA as early as their next scheduled meeting (Monday, Sept. 21).

Walter Reed is famous as the conqueror of Yellow Fever. He was born in Gloucester County, VA to Lemuel Sutton Reed (a Methodist minister) and Pharaba White. During his youth, his father served as a Methodist minister in Harrellsville and Murfreesboro, beginning in 1851, the same year Walter was born.

According to his biography on britannica.com, in 1866 the family moved to Charlottesville, VA where Walter intended to study classics at the University of Virginia. After a period at the university he transferred to the medical faculty, completed his medical course in nine months, and in the summer of 1869, at the age of 17, was graduated as a doctor of medicine.

After obtaining additional clinical experience, Dr. Reed chose a military career. In February 1875 he passed the examination for the Army Medical Corps and was commissioned a first lieutenant.

One year later, he married Murfreesboro native Emilie Lawrence, one of nine children of John and Hannah Rea Lawrence. Walter’s parents had returned to Murfreesboro in 1874 and lived in the same house as they did previously. The Lawrence family lived across the street.

During the next 18 years, changing stations almost every year, Reed was on garrison duty, often at frontier stations. In 1889 he was appointed attending surgeon and examiner of recruits at Baltimore. He had permission to work at the Johns Hopkins Hospital, where he took courses in pathology and bacteriology.

In 1893 Reed was assigned to the posts of curator of the Army Medical Museum in Washington and of professor of bacteriology and clinical microscopy at the newly established Army Medical School. During the Spanish-American War of 1898 he was appointed chairman of a committee to investigate the spread of typhoid fever in military camps. On the completion of the committee’s work in 1899, he returned to his duties in Washington. Almost immediately he became involved in the problem of yellow fever. The result was his brilliant investigation in epidemiology, tracing Yellow Fever to mosquito bites, and the eradication of the deadly disease.