AHOSKIE – What started four weeks ago with registration for the Gallery Theatre’s 49th Youth Summer Workshop ended with a rousing success on stage with Annie Jr.

Those that signed up initially were part of a small video audition where they were allowed to sing a song of their choice, which helped director Jill Gadsden gauge several factors such as talent, stage presence and personality in her effort to match them to a certain role in the play.

Following this musical right from the beginning was very enlightening; it was hard to tell a difference really between adults or kids in a theatre production. They both portray similar traits such as bouncing off the walls with unbridled energy to constantly losing their wardrobe or props.

With only four weeks to prepare, rehearsals began immediately, involving over 40 children (ages 7-17) and a crew of 11, including Gadsden and assistant directors Hope Miller and Michelle Newsome. 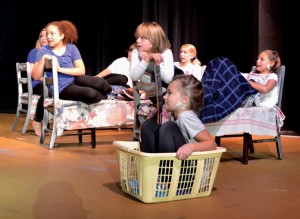 For anyone ever involved in a theatrical production you know how confusing and inept the first week or more can be. Now take into account that normally there is at least eight weeks to prepare for a show, and the Annie Jr cast/crew had only four. Then take into account it is a musical, which adds singing, dancing and choreography. Now you top it off with the fact that they are children and the chaos theory definitely applies.

To help with everything from costumes to herding kids, Murfreesboro residents Rusty and Heather Boyd rose to the challenge and even offered up their own children to perform in the musical. Hope Miller of Hope’s School of Dance also gave of herself, as did everyone else, everyday, five days a week, three to five hours a day.

At first they were working on a bare stage, which is normal. Back stage, screen graphics were being created to use in later rehearsals and the live shows by Sounds and Production engineer Bobby Hoggard. Props came along nicely and easily since the show was a character based musical and background graphics worked wonderfully.

As the children started to grow into their own and have fun and embrace their talents, it started to show, and when that happens, magic can be made on the stage! Days before the opening the children’s excitement and nervousness began to show. On opening night, just an hour before the show was to go live in front a 200-plus audience, it was all the crew could do to keep the cast contained.

Catie Wise, the young lady who portrayed Annie, nailed the part, bringing energy and persona to the role and made it her own. Her stage presence and fearless embrace of Annie was truly wonderful and belied her years.

Along beside her in a lead role was Gallery Theatre regular Jordan Martin, who not only played Daddy Warbucks to perfection, but exhibited remarkable patience and interaction with the children. Madeyln Messer, who played Mr. Warbucks’ Secretary Grace, did a wonderful job; her mixture of sweetness and strength brought the character to life.

The main orphans, Molly (Avery Byrum), Pepper (Eleanor Boyd), Duffy (Molly Hairston), Kate (Madilyn Strickland), Tessie (Emma Ward) and July (Serena Merritt) all did a great job. They exhibited chemistry and excitement in their characters and were the backbone to the entire show.

Sarah Powell, who portrayed the evil orphanage lady Miss Hannigan for the Friday show and Angel Baker who played the character on Saturday, were both very convincing in that role. Both girls showed very mature acting ability and were also the brunt of many stares and jokes as they were subjected to a torturous hair prep to bring the orphan ladies scary hair to life by show stylist Tommy Hurdle of Tommy & Co. Hair Designs of Ahoskie.

Rooster Hannigan, the scheming brother to Miss Hannigan, was played by Zach Wise and he pulled it off with just the right touch of charisma and humor. Rooster’s girlfriend and cohort in crime was played nicely by Caterina Jones.

Other honorable mentions go out to Avery Boyd who portrayed Mr. President; Brycen Newsome who played Daddy Warbuck’s butler; Marlon Kunstler who was Mr. Bundles and the unknowing accomplice to an Annie escape from the orphanage; and Lt. Ward played by Justice Zoch. Annie’s “star to be” was played by Grace Burke who lured us in with her solo song about wanting to take New York by storm. She sang the song with hope and reservation, as it would be with anyone who just got off the bus with suitcases in hand and sees NYC for the first time.

Many children played more than just one role in this production, so not every credit is mentioned. However, every child in the Gallery’s rendition of Annie Jr held themselves with professional accord and should be very proud of the job they did, and are each deserving of a big thanks from the community and the over 700 folks who came to see the show.

If you feel like you are missing out on the theatre experience, stay tuned because up next is an event a half a century in the making when the Gallery Theatre presents it’s 50th Anniversary Gala on Sept. 19.

Hold (off) that Tiger!