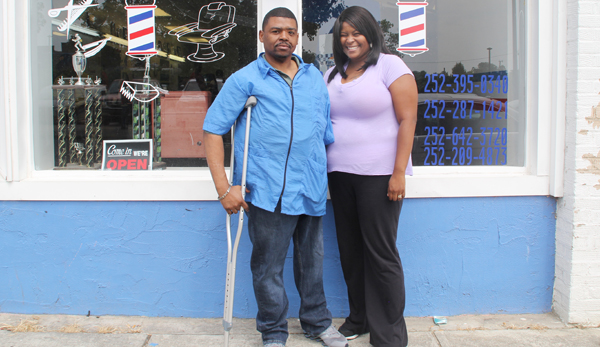 Rhynda Riddick stands with his friend, Natesha Giddings, in front of “The Barbershop” in Ahoskie. Despite losing a leg in a motor vehicle accident in 1993, Riddick puts in long hours daily, mostly standing up, as a barber….a job that’s tough on his prosthetic leg. Staff Photo by Cameron Jernigan

He has had a prosthetic leg since 1993, the same year he graduated from Bertie High School when he was involved in a head-on motor vehicle collision. The Powellsville native, and great-grandson of C.G. White, had a four-year athletic scholarship to Elizabeth City State University when he was involved in the accident, derailing his football aspirations.

“God brought me through that so I would still be here. It’s been a blessing,” he says.

A year later he decided to go to barber school, and that has been his profession ever since. He currently cuts at “The Barbershop” in Ahoskie.

“I’ve always had the determination to keep going and the determination to make it. I had two kids, one is 18 and one is 3. It’s sometimes a struggle even to get up in the morning and go about my day. But I continue on with my drive and my motivation to make it. I always want to be a role model for young people and, you know, for adults also,” he explains.

His weight was a factor in going through four legs in the 20-year period.

“I was really hard on the legs. When I get up in the morning, I don’t take it off ‘til, sometimes 10, 11 o’clock at night, so I’m rolling all day. I’ve had the knee to break, and continue working with it until I couldn’t anymore,” he went on to say.

Due to a computer chip in the leg, he has to charge it every night.

His doctor recently informed him that he had the chance to get a new leg. This leg would be more personalized and fitted, matching every contour of his leg. But it would cost way out of his price range.

“Technology has changed so much, and this guy at Orthopedic & Prosthetics East (in Greenville, NC) guaranteed me, if I do my part, that I will walk. That’s my goal right now. The leg will run me around $50-60,000,” he explains.

“First, my pride was getting in the way of me stepping out and asking for help. I tucked my pride away and asked,” Riddick continued.

Since he is involved in church, he had been considering a church related event to raise money. He ran the idea of a gospel concert across his friend of almost 15 years, Natesha Giddings, and she took off running with the idea.

“It was a blessing that they donated their time and talent to me that night,” he goes on to say.

The concert took place at First Baptist Church Powellsville on June 26. There were performances by Marvin Bobbitt and The Rising Suns, Takeyla Hall, New Generation, Walter Smallwood, Nyasia Luke, and a performance by Soul Saving Station’s praise dance team, Anointed Vessels. Giddings and “The Messenger” Craig Reid hosted the event. Reid did most of the hosting however, as Giddings spent must of the concert in the role of event director, getting the acts ready and handling backstage business.

“When we came up with the idea, I didn’t ask him why he needed another (prosthetic leg). All I knew was, my brother needed a prosthetic leg and we gotta make it happen,” Giddings says of her friend.

“I just went head first, and a lot of things I came to Riddick after the fact, like ‘by the way…. this happened’. Like he said, God was really in it and he really blessed us,” she continues.

“Marvin Bobbitt and The Rising Suns, they are a really good group. They came all the way from Roanoke Rapids. They have been on stage with a lot of big name gospel groups and for them to come down and donate their time and talent. That was really a blessing. As a matter of fact, all of our artists that were there did,” Giddings noted.

“I can’t take all the credit, so I have to give credit where credit is due. Tyrone Ruffin, who’s also a big name in this area as far as gospel is concerned; he really helped out a whole lot as far as putting the concert together and helping us promote it,” she added.

“Nobody charged us ANYTHING. Nowadays, in a world where everything is based around a dollar, to have people say ‘Yes, we’re gonna do this and not charge you anything’, that’s a blessing. I’m just thankful that everyone came out and supported, and donated and helped us promoted it, “she says.

“Once God is in a situation, it’s gonna manifest,” Giddings stated emphatically.

Riddick says he’s already raised around $3,800. He started in March, doing dinner sales and raffles. All of the other barbers he works with donated two free haircuts to the concert. Lady Renee Stackhouse of New Ahoskie Baptist Church and the young lady that made flyers for the concert helped tremendously.

If anyone wants to donate money, there is an account at State Employee’s Credit Union under his name and his wife’s name (Jamila Riddick). There is also a Go Fund Me account under the name Prosthetic Leg for Rhynda.