MURFREESBORO – “It’s a sad day….it’s like a family member dying.”

Those were the words of Lynette Bunch, one of the founders of the North Carolina Watermelon Festival in Murfreesboro, upon sharing the news of the event’s demise after 29 years.

As reported Tuesday on our website (www.r-cnews.com), the Festival committee met, as scheduled, Monday night and opted not to hold the festival this year. It was originally scheduled for July 29 through Aug. 1 and would have marked the 30th year of the Festival, an event that normally attracts thousands to Murfreesboro during its annual four-day run. 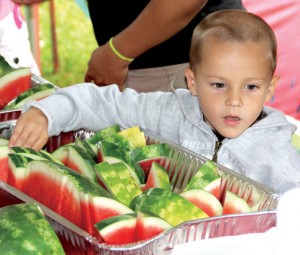 There will be no free “sweet treats” this year with the cancelation of the 2015 North Carolina Watermelon Festival in Murfreesboro. News-Herald File Photo

In a press release sent Tuesday, the full committee apparently acted upon a unanimous decision reached by the executive committee at their April 16 meeting.

“The deciding factor was an economic decision, but not the sole factor,” as stated in the press release. “Over the past few years the community and society have seen changes that have negatively affected the respect and desire for the mission of the festival.”

Contacted Wednesday, Bunch told the Roanoke-Chowan News-Herald that the committee did indeed make the final decision, but she felt that conclusion was reached after the Town of Murfreesboro opted to no longer support the event.

“We made the decision to cancel, but the town played the hand,” Bunch stated. “When we were informed that the town would no longer support us financially, it knocked our socks off. It was like being punched in the stomach.”

Bunch added that up until just a few weeks ago, everything for the 2015 Festival was, “on go.”

“The bands have been booked; we had scheduled the company that provides the (midway) rides; and vendor applications were coming in….we were ready,” she said.

However, Bunch admitted that the festival’s financial status did take a hit last year due to rainy weather during the event.

“We planned to try and get through this year, with it being our 30th year, and then Kay (Thomas, who also serves with Bunch and her husband, Percy, as the major planners for the event) and I were considering stepping down and turning the festival over, pass the torch so to speak, to someone else and let them do with it as they wish,” she noted. “We were hoping they (the town) could find some money to help us out for this year. If they didn’t then the risk fell in our (committee) laps and if there is rainy weather again then we pick up the entire bill.”

Bunch said local entities that use the Festival to generate income will be hurt by the decision.

“I feel for them; people like our local civic organizations, churches and the Jefcoat Museum who conduct fundraisers at the festival,” she remarked. “Even the 5K run that’s held prior to Saturday’s parade….that event raises about $2,500 a year for the local Rotary Club and they, in turn, use that money to help fund the children’s reading program at the library here in town. I just wish the town would look at the bigger picture here of how this Festival helps our little town in more ways than one.”

As far as the future of the Watermelon Festival is concerned, Bunch said it doesn’t look promising.

“I do not see a glimmer of hope; not unless someone wants to step up and take it over,” she remarked.

Even with a noted decline in attendance, the Festival was responsible for attracting 5,000 to 10,000 people to town over its annual four-day run. That fact was welcomed news for businesses in town.

“We’ve enjoyed fairly good crowds in our business over the years, but I have noted a decline in that number over the most recent years,” said Billy Theodorakis, owner of Walter’s Grill on Main Street.

While he hates to see the Festival end, Theodorakis said the right decision was reached on both sides.

“There are a lot of issues going on here that folks just don’t know all the details about,” he stated. “I will say that the demographics are constantly shifting and changing. What was popular at the Festival a few years ago may not be that way today. You have to change to keep up with change.”

Theodorakis said he did suggest to Festival organizers about 10 years ago that they needed to consider charging admission to the event.

“Even if it was just a dollar or two to get in, I felt people would pay that,” he said. “You have 10,000 in attendance, well that’s $10,000 or $20,000 in the bank to use to make the Festival better; or use that money to take some of the financial burden off the town who has, over the years, paid for and provided security and sanitation at the Festival. Plus I would have cut the Festival from four days to three and looked at providing better control on how the foot traffic moves going in the main gate and coming out.”

The Roanoke-Chowan News-Herald was unsuccessful on Wednesday in an attempt to contact Murfreesboro Mayor John Hinton for comment.

Beware of the bears!