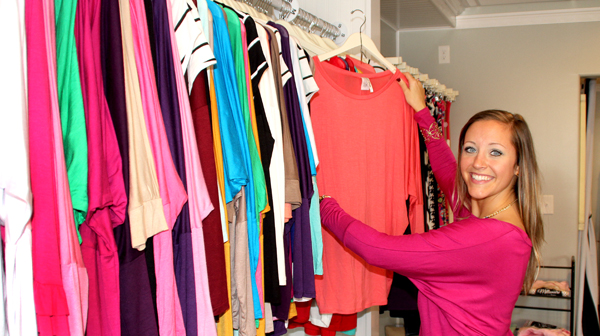 Rebecca Martin displays just one of numerous styles and colors of women’s apparel found at her business – the Mini Pearl Boutique. Staff Photo by Cal Bryant

CONWAY – If Mina Pearl Martin was alive today she would just smile when passing by 116 East Main Street in downtown Conway.

As a matter of fact she would perhaps stop at that address for a bit of shopping because, after all, the store bears her nickname, and is owned by her granddaughter.

After years of careful planning about her future, Rebecca Bryant Martin opted to take the plunge into the world of a business owner. Not just any business, mind you, but rather a women’s boutique.

Prior to becoming a business owner, Martin spent years as a waitress, as far back as her high school days at Northeast Academy. She was a popular server at Napoli’s, an Italian restaurant on Main Street in Murfreesboro.

“I’ve always dreamed of this,” Martin said, waving her hand in a circle as she stood inside her boutique last week during a grand opening event. “I guess I became real serious about this when Jonathan (Martin, now her husband) and I got engaged and that was well over three years ago.”

As part of that dream, Martin said she wanted the store to be located in Conway.

“We talked about a few other locations, but the discussion always came back to Conway,” she said.

Her husband talked to the operators of Taylor Drug (Mitch Taylor), located next door. They owned the building and Jonathan Martin worked out a deal to rent the space, which was built in the mid 1930’s as Lanier’s Grocery Store and was later used as a florist.

Rebecca’s business actually started early last year in the spare bedroom of her home in Milwaukee. Ironically, that was the home of Mina Martin and her late husband, Roger, which Rebecca and Jonathan remodeled.

“It was a very small scale operation,” she noted.

The name of the business is a tribute to Rebecca’s late grandmother.

“Her name was Mina Pearl Martin, but all her nieces and nephews called her Aunt Mini Pearl,” she explained. “Hence came the name – Mini Pearl Boutique – plus I just like the name.”

The business bore the same name in Milwaukee and its quick success sent Rebecca and Jonathan looking for a larger space.

“We got the keys (to the Conway location) in September of last year and worked basically non-stop for two months to open for business,” Martin said.

She had plenty of help, to include her parents – Tommy and Patricia Bryant, and Jonathan’s parents – Johnny and Becky Martin, along with other family members. The store opened on the day of the 2014 Conway Christmas Parade (Nov. 29). However, the formal grand opening was conducted last week by the Northampton County Chamber of Commerce.

“It just goes to show you how the need for a business such as a women’s boutique here in our county can prove successful,” said Judy Collier, the Chamber’s Executive Director. “We wish Rebecca and her business much success.”

The Mini Pearl Boutique features women’s apparel, jewelry, hand bags, shoes and boots. There’s even something for male shoppers as Martin carries a line of the popular HeyBo t-shirts.

“I would love to expand, but there’s not a lot of space to do so right here,” Martin said when asked about her future plans.

Martin didn’t hesitate when the question was posed about opening a second store.

“Yes, most definitely,” she remarked. “Where, I’m not sure….where ever the market for my line of clothing and accessories leads me, that’s where I’ll go.”

But for now, she’s quite content with being in the heart of downtown Conway. And based on her success by way of satisfied customers – coming from as far away as Roanoke Rapids and Ahoskie, and Franklin and Emporia in Virginia, they are content as well in having the Mini Pearl Boutique right where it is.