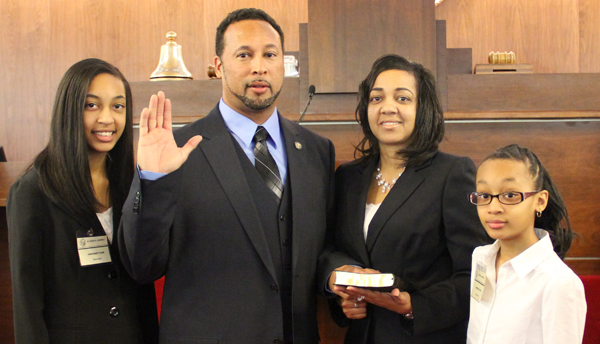 District 5 State House Representative Howard Hunter III took the oath of office on Wednesday in Raleigh, joined by his daughters, Zaria (left) and Kayla (right), while his wife, Dr. Wanda Hunter, held the Bible, the same one used by his late father (Howard Hunter Jr.) to take his oath back in 2003. Contributed Photo

RALEIGH – As a rookie state legislator, there were plenty of special, first-time moments here Wednesday for Howard Hunter III.

However, it was a simple note written for a Hertford County Early College High School senior that served as Hunter’s first “official” order of business as the newly elected State House District 5 Representative.

Upon retuning to his office (#1307 in the Legislative Building on Jones Street in downtown Raleigh) after being sworn in, Hunter found a personalized notepad on his desk. On it he jotted a note to the school’s principal: “Please excuse Addison Hoggard from class on Wednesday, January 14, 2015 as he was attending the swearing in ceremony for State House Representative Howard Hunter III.” 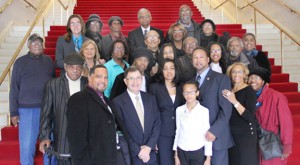 Howard Hunter III (front row, third from right) stands with his family as well as a group of Hertford County citizens who made the “icy” trip to Raleigh on Wednesday to witness Hunter being sworn in as the District 5 member of the North Carolina House of Representatives. Hunter spent 10 years as a Hertford County Commissioner before winning the House seat in November of last year. Contributed Photo

“It meant so much to me to have them all here,” Hunter said of the Farmer family as well as a bus load of Hertford County citizens who braved the icy roads to see their native son take his oath of office. “For them to come to Raleigh in this bad weather to be a part of my special day really and truly touched my heart. I got kind’a teary-eyed when I saw that bus roll into the Legislative Building parking lot.”

Hunter said it was an eventful day on numerous accords.

“For starters, my family (to include wife, Dr. Wanda Hunter, and daughters Zaria and Kayla) and I left Ahoskie at 5:20 a.m. Wednesday in icy weather,” he said. “Just beyond Rocky Mount on (US highway) 64, we ran up on a bad wreck where a tractor-trailer had slammed into a (Nash County) deputy’s car. They were just about to block the road off to traffic, but we got through.”

Shortly past 7, the Hunter’s arrived in Raleigh.

“We were the first ones to arrive at the building,” Hunter said. “The bus from Hertford County rolled up shortly thereafter and I was able to get them all in.”

Hunter met with his fellow Democrats at 8 a.m. Ninety minutes later he stood with his wife as he raised his right hand and took the oath of office.

“Was I nervous….nope, not a bit,” Hunter remarked. “I kind’a felt at home, being in a place where my daddy (the late Howard Hunter Jr.) served for the better part of 20 years. Most of those there remembered my daddy.”

The Bible used in Hunter’s swearing-in was the same one used by his father to accept the oath back in 2003.

“There was an envelope inside that Bible, one given to daddy at the start of the 2003 legislative session; it contained his (House Chambers) seat number and was signed by Denise Weeks, the Principal Clerk for the House,” Hunter said. “Denise remains as the Clerk and I showed her that envelope on Wednesday morning. She almost broke down and cried.”

Hunter said he voted with all other House members (Democrats and Republicans) to elect Tim Moore of District 111 (Cleveland County) as Speaker of the House.

“Tim is a Republican, but I feel he’ll do a good job as Speaker,” Hunter noted. “He’s from a rural county and understands the needs of rural areas. I see him as a fair person who, like me, is willing to work at a bi-partisan level to get things accomplished.”

Other orders of business to take care of on opening day of the 2015 NC General Assembly were to elect the House leadership. In addition to Moore, Paul Stam (Wake County) will serve as Speaker Pro Tem; and David Lewis (Harnett County) as Rules Chairman. Larry Hall (Durham County) was earlier selected as the Democratic leader.

After the House recessed until Jan. 28, Hunter used his time to meet with the Democratic Black Caucus and then attended a reception he staged in honor of the Hertford County contingent attending the swearing in.

“I’m excited and ready to go to work when we reconvene on Jan. 28,” Hunter said. “From the other legislators I’ve spoken with, we’re all ready to roll up our sleeves and get down to the business of making North Carolina the best state in the nation.”

“I know that’s a lot for a first-year legislator, but my experience all those years as a Hertford County Commissioner has prepared me well and I feel I have a lot to offer,” Hunter stressed.

Hunter is also excited over the fact that the House leadership is discussing the establishment of a mentoring program; the same type of effort he introduced and witnessed work first hand when he served one year as President of the North Carolina Association of County Commissioners.

“She has a great track record of working well with the state and the federal government,” Hunter noted. “Plus she has already proven one fantastic trait….she knows how to keep me on track. I need that because you know how much I love to stop and talk to folks.”

In closing, Hunter paid thanks to those who were a part of his special day.

“First and foremost I thank my family for being there for me and for their endless support,” he remarked. “I thank the citizens for making that trip in the bad weather to show their support, and to those who wanted to come but chose not to because of the icy weather. Thanks to all the citizens who sent me to Raleigh through their votes. And a special thank-you to Sharnese Ransome, she set up a lot of things for me and my reception on Wednesday.”

Hunter will join his fellow General Assembly members back in Raleigh on Jan. 28 for the start of the “long session” which may not end until July.