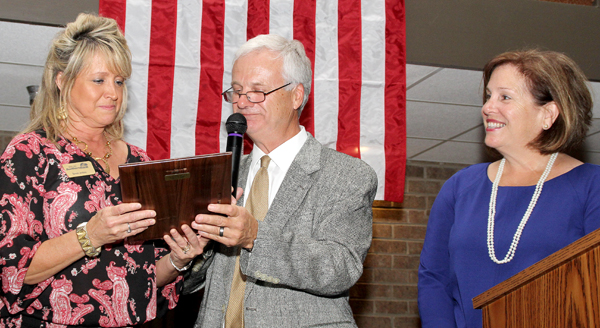 AHOSKIE – Someone once said that if you do not promote yourself, then no one else will. 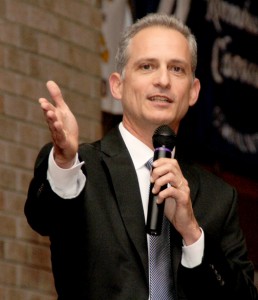 Serving as the keynote speaker at the 71st annual Ahoskie Chamber of Commerce Banquet, Tuttle promoted a new venture – Visit North Carolina, a private/public partnership for which he serves as Executive Director. Tuttle’s group aids North Carolina businesses, groups and organizations, such as local Chambers of Commerce, in promotion and advertising.

“Tourism is all about economic development and marketing,” Tuttle said, speaking to the assembled audience gathered inside the Ahoskie Inn.

He outlined the main purpose of Visit NC, saying its goals are to get more people to make the state their travel destination, to stay longer and spend more money while they are here.

“The way we do that is through strategic partnerships and alliances with other tourism entities and Chambers of Commerce throughout the state,” Tuttle explained.

Tuttle said that tourism is “big business” in North Carolina and it’s on the rise….up by 119 percent since the 1990’s. It’s now a $20 billion industry statewide.

“That last number is important because it contributed $1.01 billion in state tax revenue,” he said. “As you can see, tourism is an economic engine within our state. It’s also responsible for about 200,000 jobs.”

Tuttle crushed the numbers even further, saying that tourism in HertfordCounty accounted for $26 million in visitor spending in 2013. That was a 2.6 percent increase over 2012.

Like every other county in the state, Hertford County has a Tourism Development Authority. They operate on a budget…most choose to spend the majority of those promotional dollars promoting themselves inside the state. 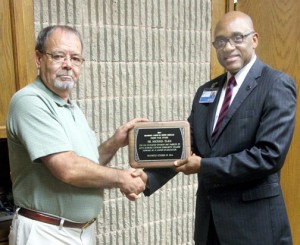 “Among our roles in Visit NC is to market outside the state, so as not to step on the local advertising done inside the state by the county Tourism Authorities,” he stressed.

Tuttle said Visit NC has an advertising budget of $3.3 million. They are able to stretch that money through cooperative marketing – partnering with local tourism offices and benefitting from in-kind partnerships with media outlets.

“We can take our $3 million and wind up with about $9 million in advertising by using these partnerships, mostly outside the state,” he said.

He noted a big shift in the landscape of advertising, saying that 20 years ago there were three ways to get your promotional message across – print products, radio and TV.

“Now there are thousands of ways that people get their information….we all visit websites; we use our smart phones; and social media: Facebook, Twitter, Pinterest, you name it,” he said. “If you don’t have a lot of money you can still find a way to promote yourself.”

Tuttle said websites are the key to attracting visitors anywhere in the state.

“Our website (www.visitnc.com) gets about four million unique visitors each year,” he said. “We’re finding that about 80 percent of travel decisions are made while visiting a website. On our website we show visitors what they can do, what they can see during their visit here. We supply links to the local Chambers of Commerce and local tourism websites. If you are not already online, I encourage you to do so.”

“That’s a free way to get your message, promote yourself, to 4 million people,” he said. “Two of the most popular links on our website are Special Events and Special Offers. People are always looking for interesting, unique places to visit and they want it at the best price possible.”

Tuttle also promoted another travel-friendly website unique to North Carolina – www.Project543.com. He said it features 543 things that can only be done in North Carolina. Project 543 gets its name from the 543 miles from Manteo to Murphy.

“It has about 200 listings, basically video postcards, as of right now, but we will get to 543 listings,” he said. “It’s a great way to showcase the rural areas. The Brady Jefcoat Museum (in Murfreesboro) is part of the project.”

Visit NC also uses media outlets from around the world to generate travel related stories and photos to attract visitors to the state.

“There’s something about editorial coverage that people believe in more than ads,” he said. “I would encourage you, the Ahoskie Chamber, to become more public relations oriented by reaching out to media, locally, in North Carolina and beyond, to promote yourself, promote what’s unique about your area.”

Sports is another promotional avenue. Tuttle said something as simple as hosting a youth sporting event is a great way to attract unique visitors. They, in turn, spend money while their children participate in a contest.

He added that Chambers can look to promote their area as a retirement village.

Visit NC still produces a printed Travel Guide that are distributed to the nine Welcome Centers in the state. They, Tuttle said, are another great promotional tool.

“It has plenty of character; it’s a great look; I want our Film Office to have a video on file of Ahoskie’s downtown area when we have movie and TV producers scouting for locations to film,” he remarked.

The banquet also featured video comments from Marshall Cherry, President of the Chamber’s Board of Directors, who missed the event due to being out of town conducting business for his employer, Roanoke Electric Cooperative.

“We work together, standing shoulder to shoulder with our business community, to stimulate growth here in the Ahoskie area,” Cherry said. “We are closing out a very successful year and I’m very excited about what the future holds.”

“She hit the ground running and has done a tremendous job in leading our organization,” Cherry stressed. “The sky is the limit for the Ahoskie Chamber and I encourage all our members to help keep our Chamber moving forward.

“We’re seeing a lot of growth and energy within the Ahoskie Chamber,” Braswell remarked. “There is a lot business and a lot of commerce transacting every day in Ahoskie. I’m seeing an increase of individuals, those without bricks and mortar offices here locally, coming to my office to join the Chamber because they are doing so much business in our area. People perceive us as the business hub of northeastern North Carolina. We have a lot to be thankful for.”

Two individuals were honored at the banquet for their outstanding achievements over the past year. Teresa Jenkins, City Executive for Southern Bank of Ahoskie, earned the Chamber Person of the Year Award. Dr. Michael Elam, president of Roanoke-Chowan Community College, received the 2014 Roanoke-Chowan News-Herald Front Page Award.