The doctor is in! 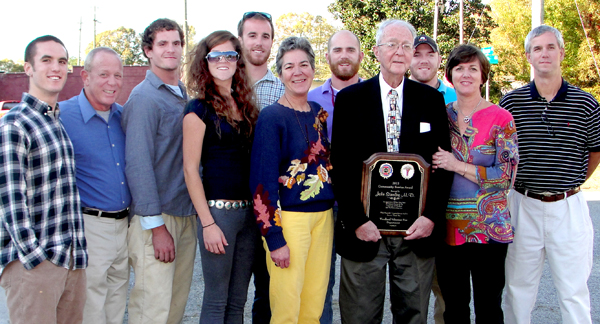 Dr. John H. Stanley is surrounded by his family – from left, Davis, Stevie, Arch, London, Brodie, Gen, John, Hunter, Dixie and Paul Harrell – at an Appreciation Day held in his honor on Nov. 3 in Woodland. Photo by Danny Bowman

WOODLAND – Dr. John H. Stanley has spent his adult life caring for others.

As he draws closer to retirement, which he laughs may never come, the passion that burns within his heart for the greater Woodland community sends him on a quest to find his successor.

“I don’t have a date in mind or plans to retire, but I feel like it’s time to start looking for a replacement,” said Stanley last Sunday while surrounded by family, patients and friends at an event held in his honor at the Woodland Volunteer Fire Department.

“I’m having some heart trouble….I don’t want to die while I’m still working without the opportunity to find just the right person to take over this practice,” he added. “I think a young person coming out of residency will do very well here. If they had to open their own practice from scratch, I don’t think they could make it here. Taking over an existing practice will work.

“I want to make sure whoever comes here that they can take care of these people,” he added. “I’d be more than willing to help that person out, help them get started, without any compensation.”

The “Appreciation Day” held in Stanley’s honor was open to the public. And judging by the turn-out, it was apparent the number of lives Stanley has touched during his 58 years in Woodland.

“Doc” and his family welcomed the guests. He knew and addressed everyone on a first name basis. He received handshakes, hugs, kisses, and even a few gifts as the guests expressed their individual thanks to him.  Among those were two of his oldest patients, 96-year-old James Lee, and 103-year-old Jewel Tolson.

It was only fitting that the event was held at the Woodland VFD, where Stanley has proudly served as a member for 37 years. He recalls when the fire house, with its one truck, was located next to his office.

“Like the people of this town and the community, I have a passion for the Woodland Fire Department,” Stanley said. “I’m also a member of the Woodland Men’s Club.”

After socializing, Collier presented Stanley with a special plaque, the 2013 Community Service Award.  It was given by the Woodland Volunteer Fire Department in appreciation of Stanley’s many years of dedicated service as a doctor and volunteer fireman to the community of Woodland and the surrounding area. This was the first award of this nature ever presented in Woodland.

Dr. Stanley’s simple office, located at 105 Spruce Street – less than a stone’s throw away from the town’s “main drag” – is nearly the same as it was when he had it built upon arriving in Woodland in 1955. At that time he had finished his internship after graduating from the Medical College of the State of South Carolina in Charleston.

His brother, the now late Hubert Stanley, designed the first weather satellites (the GEOS-2) during his time with NASA. That device was launched in early 1968. The GEOS-3, also with Hubert Stanley serving as the project scientist, launched seven years later.

John is the only member of his family – two other brothers, both now deceased, and two sisters who are still living – to go into the medical field.

“During my internship I wrote to the medical boards in those three states to see what was available,” he recalled. “I found out that most of the places that were recommended were really not legitimate openings, rather a case where townspeople got disgruntled with the doctor there and wanted him to leave.”

Stanley said he spent about two weeks checking out the real prospects on the list.

“I thought at that time that Woodland was the best thing for me…..now, 58 years later, I still feel the same way,” he smiled. “It was love at first sight.”

Stanley said his wife, Neva, initially discouraged him from starting his medical practice in Woodland.

“She was from Halifax County and felt that people would say the only reason I chose Woodland was so she could be close to her family,” Stanley said.

Geneva (Neva) Applewhite Stanley, who died in January of this year, met her husband-to-be while she was a student at Queens College in Charlotte. A pharmacist in Conway, S.C. that Dr. Stanley worked for in the summer during his break from med school had a daughter enrolled at Queens.

“He (the pharmacist) owned a motel at Myrtle Beach and I would stay there a lot of nights,” Stanley recalled. “As things turned out, the pharmacist’s daughter and Neva were friends and went one weekend to same motel….that’s where we first met.”

Stanley said he had no idea of how many patients he has seen over a span of nearly 60 years.

“I do know I’ve delivered over several thousand babies, but I gave that up years ago after the insurance went up so high that I could no longer afford it,” he noted.

However, what he still “delivers” to greater Woodland community is his unyielding love and compassion.