Following a setback against Lawrence Academy that produced only their third loss of the season, the Northeast Academy tennis team still has their eyes on the prize of a state championship.

Along the way veteran coach Jake Campbell and his lady netters have dominated the competition; at one point in the season winning eight in a row. 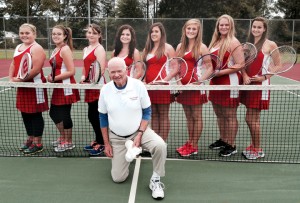 Despite the spoiler by the Warriors on Senior Day Tuesday in Jackson at the Northampton County Cultural & Wellness Center Recreation Complex, Northeast’s record on the year is 13-3. The Lady Eagles still have one match remaining: against Faith Christian in Rocky Mount today (Thursday).

“Actually, we’re lucky to have the record we have with the injuries we’ve had,” said Campbell in a phone interview. “But the kids have worked hard, they’ve tried hard, and we’ve had great senior leadership.”

Foster has been the number-one seed for the Eagles and played solid all season, losing Tuesday to Lawrence top-seed Bailey Nelson, 7-5, 6-1, with Nelson ranked as one of the top players in the state.

Cocke is number-two on the Lady Eagle depth chart with Junior Robyn Barnes holding down the No. 3 spot.

Freshman Lauren Flythe has been playing in the No. 4 spot, and another frosh, Tracy Clark, has been holding down the No. 5 slot. Burke, who had not played tennis since she was in the eighth grade, has filled in nicely at the No. 6 spot.

Campbell opened the season last August with a team that had experience, having had last season end at the hands of eventual NC Independent Schools Athletic Association state champ, Statesville Christian.  Sprinkle in some fresh face newcomers who have surprised their coach with their early contributions and you’ve got a pretty good formula for success.

The toughest blow for the team may have come before the first fuzzy ball was ever tossed up for a serve this year.  Before the season started the Eagles lost one of their top players, junior Olivia Brown, who would’ve probably been their No.2, to a knee injury that required surgery. Brown has been on crutches all season, but has been there often just off the asphalt at the Rec Center cheering on her teammates.

“She (Brown) probably would’ve beaten everybody this year,” said Campbell. “But her going down actually pushed some of the other kids to step up.”

Campbell says a lot of the reason the team kept its focus was, again, to his group of seniors who led the way.

“They have held up their end,” the coach said. “They have all played a little better than I thought they would.”

Because only three teams in the Tarheel Independent Conference field tennis teams (NEA, Lawrence, and Ridgecroft), the Eagles try to schedule other top independents as well as many public schools as possible.

This year they played home-and-home matches with 2A powers Hertford County, Pasquotank, and Northeastern, along with 1A schools Northampton County and Gates County.

“We play these schools all the time,” Campbell said with a smile. And it was for good reason too as this year the Lady Eagles went 10-0 against those opponents. The most recent win was an 8-1 win over Gates County that made Northeast 13-2.

Their only losses have come to Lawrence, Greenfield – who finished second in the state to Statesville in 2013, and Faith Christian; against whom they have a chance later today (Thursday) to get revenge.

Even as the season winds down, Campbell says it’s still a learning process for the girls.

“We still have a ways to go,” he said. “Consistency is always a problem because after you teach the girls the strokes and keeping them in, consistently keeping them in is what you look for.”

The NCISAA state tournament round-of-eight begins Oct. 22 and Campbell expects the Eagles to get a bid. “It’ll probably just be us and Lawrence,” he said. The final four teams play for the state title at Barton College in Wilson the following weekend.

“I had one team that finished second in the state and one that finished fourth,” Campbell recalled. “I think this team is probably the third best team I’ve had.”

And you could almost sense him making a sly wink as he concluded, “And we still have some more matches left to play.”

WINDSOR – It’s usually the game that ends the regular season. This year, however, it fell in the middle. And... read more