We will never forget 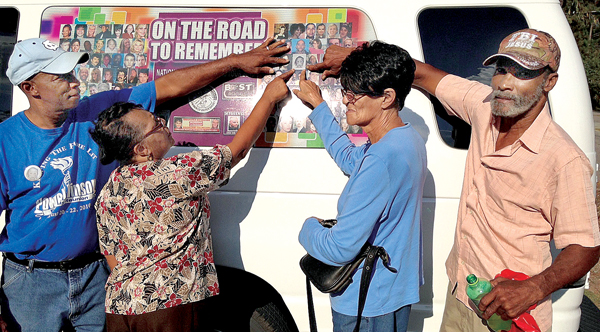 Members of the Powell family in Woodland have never given up hope that their loved one, Phyllis, will be found or details about her disappearance will surface, despite the passage of 50 years. Last week, the Phyllis Powell case was placed back in the spotlight with a stop in Woodland by the National Missing Person’s Tour. Family members are shown here pointing to Phyllis’s photo. Photo by Caroline Stephenson

WOODLAND – It has been 50 years, 9 months, and a few days since five-year-old Phyllis Lorrain Powell disappeared without a trace from Ashe Street in Woodland.

Although much time has passed since that cold day in January of 1963, about two dozen friends, family, and visitors gathered on Thursday, Oct. 3 at the Phyllis Powell Memorial Garden to share their memories and bring renewed attention that will hopefully shine new light on this missing person’s cold case.

The gathering was organized by the Wilmington, NC based Community United Effort (CUE) Center for Missing Persons as part of their annual “On the Road to Remember Tour.”

This year marks the 10th anniversary of the “On the Road to Remember Tour.” According to Monica Caison, CUE’s Founder, the “national road tour is an awareness campaign that focuses on missing persons cases that have gone cold or that have not received appropriate media coverage on the local level.  This tour provides that attention.”

The ten-day tour started on Oct. 3 in Laurinburg, NC and will wrap up in Wilmington, NC on Oct. 12.

Volunteers from the CUE team will be traveling through NC, SC, GA, FL, LA, AL, MS, VA and will attend numerous pre-planned rally stops hosted by various officials and missing person families and friends. The public and media outlets are invited to attend. CUE distributes press kits, booklets, t-shirts, and valuable information concerning missing person’s and unsolved homicide cases that have gone cold throughout the path of the tour. Upon completion of the planned route, the crew will have traveled over 3,500 miles through eight states.

“After so many years, these cases fade from the public’s radar, but for the families and friends of a missing person, the nightmare continues — every minute of every day their loved one is absent,” said Caison.

The tour travels across the country to make sure that no case fades from memory. The annual campaign serves as a reminder by featuring cases that are in need of a resolution, “they need our help and the community’s help to bring them home,” Caison added.

Volunteers, families of the missing, law enforcement agencies, groups, and officials will take part in various legs of the tour, which will include more than twenty five rally stops. The tour is slated to promote 102 missing persons and six unsolved homicide cases.

“Each year as we begin in preparation of the tour, we are reminded of the overwhelming amount of unsolved cases from across the country; we have to do more,” Caison said. “The cases we feature are a small number compared to the NCIC statistics listing between 700,000 to 850,000 cases reported annually on a national level, but I’m confident we will make a difference in those we represent,” Caison continued. “Every missing person is somebody’s child.”

For the past year and a half, CUE has worked closely with Phyllis Powell’s family to assist them in their efforts to find the missing girl.  In the fall of 2012, CUE flew in a forensic artist from Canada to create a likeness of Phyllis.  Before then, there were no known photos or images of her.  In January of this year, the artist released an age progression sketch of perhaps what Phyllis would look like today at the 55 years old.

If you have any information on the disappearance of Phyllis Lorrain Powell, please call CUECenter For Missing Persons at (910) 343-1131 or 24 Hour Line (910)