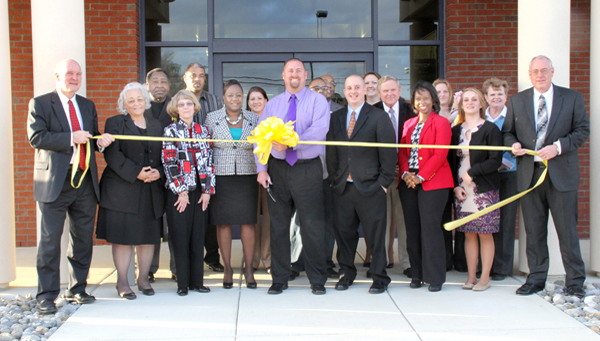 GATESVILLE – With a simple snip of a colorful ribbon, Merchants Commerce Center officially welcomed its first business on Jan. 30.

Although the State Employees Credit Union (SECU) office has been opened for a month at the new commercial development located on US 158 across from the Gates County Community Center, last week’s “open house” marked the first time that some had visited this new office.

“Thanks for being here and sharing in this great day,” said McKinley Wooten, chairman of the SECU’s State Board of Directors.

Wooten, a native of Kinston – also the hometown of Gatesville SECU Vice President Jonathan Jones – gave a brief history of the Credit Union, in existence now since 1937. He said it all started with just 17 state employees, a group of teachers that pooled together $437. Now, 76 years later, SECU boasts of 1.8 million members and $25 billion in total assets.

“The opening of this branch is just as important as the first one opened some 75 years ago,” McKinley said. “In the years to come this branch, like the very first one, will proudly serve this community.”

Jones recalled a trip he and his wife took nearly six years ago to Gates County, trying to find the old branch office in Gatesville.

“Well, I took the job here and now we’ve gone from that old building to this modern facility, a lot has changed in a short period of time, but what hasn’t changed is the SECU philosophy to not only serve our members, but the community as a whole,” Jones stressed. “We’re proud to be the first office in this new development. We’re proud to be part of Gates County’s growth.”

Bobby Hall, SECU’s State Senior Vice President and a native of Plymouth, was on hand to help dedicate the new Gatesville branch. As a SECU veteran, with over 43 years on the job, Hall said he has seen the Credit Union grow by leaps and bounds.

“We are pleased to be in Gates County; we were welcomed here from the start with our old branch office there in Gatesville,” Hall said. “What SECU has long taken pride in is personal service. The great strength of our organization is the trust built between SECU and our members. All of our branches, including this one, are active within the communities they serve and we promise that will continue to play a vital role here.”

James Eure, Senior District Manager for SECU and Vice President of the Ahoskie branch office, was on hand for the grand opening. He recalled the effort of years ago to find a location to house the first SECU branch in Gates County.

“We worked on that for a while,” Eure noted. “We tried to work out a deal to have an office in the White Oak community, but that didn’t work out. Finally, Don Gregory (now retired Principal of Buckland Elementary School) found a location in Gatesville and that’s where we called home until building this new office. I always appreciated Don’s assistance in helping us get our start here in Gates County.”

Now, SECU’s future in the county is more centrally located.

“We’re excited about our new branch here,” Eure said. “Back when I was a child, pumping gas at my dad’s store in Roduco, I would have never dreamed, years later, that I would be involved in the banking/financial business and helping to open a new facility just down the road from that old store.”

“That Advisory Board has helped blossom business here in Gates County,” Eure said.

“Thanks to all that came out to celebrate this special day with us,” said Winn. “We offer a special thanks to those individuals that played an integral part of getting the Credit Union in Gates County and now in this beautiful new facility. We look forward to many years of serving the citizens of Gates County.”