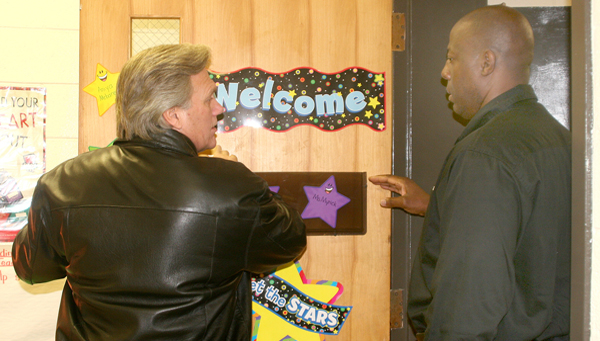 Bertie County Sheriff John Holley (right) and Commissioner John Trent test the safety of a door at one of the schools they visited on Friday. Staff Photo by Thadd White

AULANDER – The deadly shootings in Connecticut have many paying attention to school safety.

One local county is ahead of the curve.

Bertie County officials spent Friday touring schools and inspecting safety should there be an incident similar to the one in which 20 students and six staff members were killed in Newtown, Connecticut.

“This is something I began discussing with Sheriff (John) Holley two days after I was elected in November,” Bertie County Commissioner John Trent said Friday during the group’s tour of Aulander Elementary School. “We began organizing a group to make sure the schools are as safe as possible. It’s not a question of if, but when.”

Trent said he and the sheriff began working with Bertie County Manager Morris Rascoe and Superintendent of Schools Elaine White. Commissioner Charles L. Smith came on board as part of the committee due to his service not only as a county leader, but his history as a retired educator.

“It’s important that we take the time to make sure the schools are as safe as possible,” Smith said. “We need to put together a plan for training that will benefit everyone.”

Trent said he was interested in the topic because of his history as a law enforcement officer. During his time in Florida, Trent served as a State Highway Patrolman and worked with a Special Response Team as well as serving on a governor’s commission.

“My history in law enforcement is one of the many reasons this was important to me,” Trent said. “I knew it was important to Sheriff Holley as well and, of course, with Mr. Smith’s background and knowing the schools as well as he does, he was a perfect fit for service on the committee.”

“Mr. Bond knows everything we’re talking about as far as the facilities and Mr. Samberg has enlightened us on video surveillance and other areas of technology that we wouldn’t have otherwise known,” Trent said.

Holley said he shared Trent’s passion for making sure the schools in Bertie County are safe and that he was pleased to have comrades in making sure they were in the best possible shape.

“We need to know the schools and know how we can help students,” he continued. “If there is ever an incident, it is important that we know exactly how to approach things in each school and get our children and school personnel to safety.”

Tuesday night, White informed members of the Bertie County Board of Education of the pending visits and told them a safety list would be developed and there could be recommendations for changes and/or upgrades.