Principal of the Year 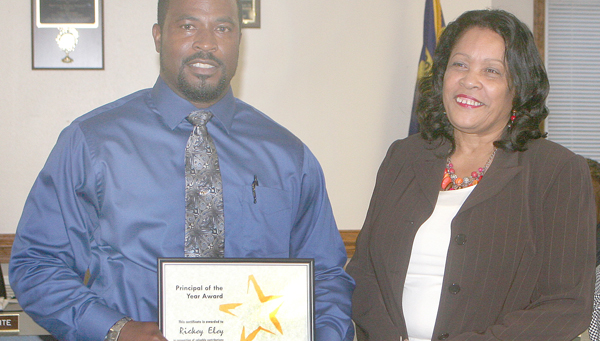 WINDSOR – Hard work and dedication are their own reward.

But it doesn’t hurt to have the respect of your peers either.

Windsor Elementary School Principal Rickey Eley has toiled as an educational administrator at every level in the Bertie County Public School district. Last week, he was honored for that success by being named the system’s Principal of the Year.

“It feels really good to receive the honor,” Eley said. “The main reason is that it is voted on by your peers. It is a true honor for them to have that much respect for what I do. I respect those ladies and gentlemen who are my fellow principals, so it makes it a real honor.”

Eley is in his first year as Principal of Windsor Elementary, spending last year at Bertie High School and Colerain Elementary School, after being moved to the high school in November of last year.

He has also served as a teacher at Bertie High School, assistant principal at the school and was one of three co-principals at BHS. In addition to those roles, he has served as Director of Operations, Director of Student Services and Principal of the Alternative School.

The award was announced at the Oct. 2 meeting of the Bertie County Board of Education by interim Superintendent of Schools Elaine White.

White said the district was going to be putting him to work.

“In the past we may not have worked the Principal of the Year, but this is the year for work,” White said.

Eley said later the honor did come with quite a bit of work as he has to prepare for the regional Principal of the Year competition. While he said he already has plenty to do, he is up to the challenge.

“People think it is just an honor, which it is, but it also involves some work,” Eley mused. “I’m not necessarily looking forward to adding that to my plate, but it comes with the territory and I’m up to it.”

As for his new assignment, Eley said he was initially apprehensive about the move to Windsor, but is enjoying his new challenge.

“When I left the high school, I didn’t like the way it happened,” he said. “Change is exactly that – change. You embrace it and move on.

“It has been very, very good,” he continued. “This is a different atmosphere, which you expect moving from high school to elementary, but it has been all positive.”

Eley said some of the changes he made initially caused concern, but he felt the staff had been supportive and had made the adjustments he asked of them.

“There is a good staff here,” he said. “Thing have been great and I’m happy to be here.”

WINDSOR – Five years… it has been that long since both bands performed at the annual football rivalry between Bertie... read more