AHOSKIE – Two local men are behind bars for allegedly stealing a flat screen TV from an Ahoskie business. 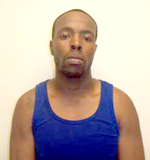 Sessoms stands charged with three felonies – larceny, possession of stolen property and possession with intent to sell and deliver a counterfeit controlled substance – as well as misdemeanor injury to personal property. He was jailed under a $20,000 secured bond.

Warren was charged with conspiracy to commit felony larceny and jailed under a $10,000 secured bond.

Both men, who may face additional charges, made their initial court appearances on Friday.

Ahoskie Police Chief Troy Fitzhugh said that Sgt. Ruffin was on routine patrol shortly before 1 a.m. Friday in the area of First Street where he noticed two individuals walking along North Mitchell Street.

“Sgt. Ruffin noted that the two were perhaps persons of interest in another case so he contacted the dispatcher and logged the time and place of the two men and what type of clothing they were wearing at the time,” Fitzhugh said.

Approximately 25 minutes later, the Ahoskie Police received a call concerning a stolen TV and damage to property at the Wash House, a laundromat on Academy Street.

“As Sgt. Ruffin was responding to that call, he saw the same two individuals he had earlier logged as on North Mitchell Street now walking on Church Street near the Wash House,” Fitzhugh said. “He noticed one of the two men carrying a large object under his arm. After exiting his vehicle and approaching the two men, Sgt. Ruffin noticed the item being carried was a flat screen TV.”

Fitzhugh went on to say that the person contacted as a representative of the Wash House described the TV (a 55-inch Vizio) as the same one missing from the business, which is open 24/7.

Armed with that information, Sgt. Ruffin arrested the two men. Subsequent to that arrest, both men were searched, revealing a bag in one of Sessoms’ pockets containing a white, rock like substance consistent with crack cocaine.

“I would like to commend Sgt. Ruffin along with responding officers Jeffrey Woodard and Melanie White for a good job,” Fitzhugh said.