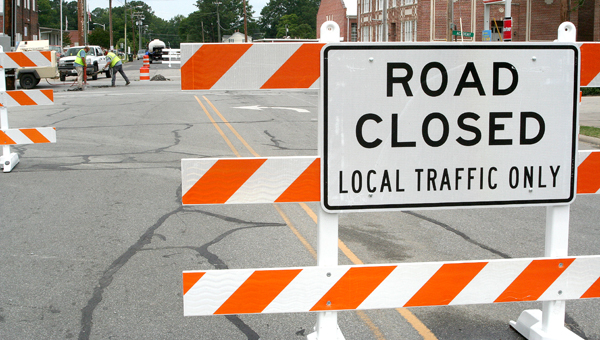 A barricade at the intersection of Main and Academy streets in Ahoskie reminds motorists of the work that began Monday on one of the town’s busiest streets. Staff Photo by Amanda VanDerBroek

AHOSKIE – Work on phase two of the Academy Street resurfacing project is underway.

On Monday, crews with the North Carolina Department of Transportation (DOT) began preliminary work on the project, closing off Academy Street (US 13), a major thoroughfare for local and out-of-town vehicles.

DOT Resident Engineer Scott Emory said the road is currently blocked off from First Street (NC 561) to Memorial Drive to allow crews to mill and resurface the road.

“This is going to be the worst of (the three phase project); if people could bear with us we’re going to try to minimize the time (delays) and lessen the pain,” he said.

Emory said the area between First and Church streets is the most worn surface of the road and six to eight inches of the old pavement must be removed and then repaved.

The construction has already caused traffic back-ups as seen on Memorial Drive/Highway 13. On Monday morning, vehicles headed northbound lined up over the bridge waiting for the traffic light to change.

Emory said the yield split at the intersection has been blocked off and changes to that signal will be made to help elevate traffic congestion.

“A traffic signal technician will be putting a little bit more ‘green time’ on that signal,” he said.

Emory said through traffic for Highway 13 should detour their route using NC 42 out to NC 11 around Ahoskie to avoid the road closure. Signs are being placed on the appropriate routes to advise motorists of the closure.

He added local traffic will be able to reach their destination utilizing side streets and avoiding where the heaviest construction is taking place.

Emory tentatively set the completion date on this phase in two weeks depending on rain days.

The third phase of the project will entail resurfacing the roadway from Church Street to Memorial Drive. Emory said that phase will not require as much extensive milling and resurfacing as phase two.

The last portion of the project will include paving the final surface of the road and placing pavement markings.

Phase one of the project included milling and repaving Academy from Hertford County High School Road (State Road 1223 at Bojangles) to First Street.

The $975,000 project is being performed by Rose Brothers Paving of Ahoskie.