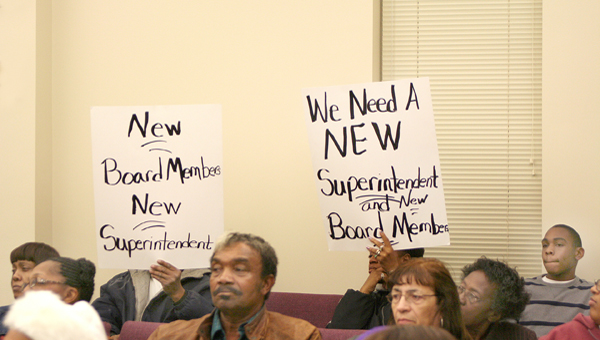 Signs of protest popped up inside the Northampton County Board of Education’s meeting room on Monday night in Jackson meeting where some citizens voiced their displeasure with the board’s plan to consolidate the county’s two public high schools. Staff Photo by Amanda VanDerBroek

JACKSON — Protesters and the demand for answers was the theme of Monday night’s Northampton County Board of Education meeting.

A group calling themselves “Concerned Citizens of Northampton County to Save Our School” attended the board meeting with signs calling for new board members and a new superintendent. The group protested outside of the Central Office and inside the board’s meeting room.

The speakers also urged board members to respond to their questions and concerns.

Webb referred to an earlier meeting between four board members, himself and few members of the “Save Our Schools” group to discuss the consolidation. The informal meeting reportedly took place following the January board meeting.

Webb said those in attendance needed to have their questions answered.

Following the public comment portion, in which seven people spoke, Board Chair Donald Johnson announced the board would recess for five minutes. After his announcement, Board member Erica Smith-Ingram urged her colleagues to respond.

She continued, “We’ve put them on a timer; we’ve listened to what they’ve had to say. We have not given them a response. The dialogue has been one sided. At that meeting on January 19 that was held at the Cultural Arts and Wellness Center, I counted, it was 102 people present and large majority of them drove from the western part of the county.”

Ingram said it was “almost patronizing” bringing the citizens out and then “putting them on a time clock.”

“These people elected us to serve their best interest and if we were good enough to have them vote for us, I think they’re good enough that we can sit down at the table, people to people, person to person, community to community, and have an honest dialogue that we can converse back and forth.”

Ingram suggested the board schedule a meeting with the “Save Our School” group in order to have that conversation.

The board then took their five minute break and when they reconvened Johnson announced the board would deviate from their agenda and convene in a closed session for attorney-client privilege.

After a nearly two hour closed session, the board returned.

“There are times when you should take time to make decisions and do what is right,” Johnson said.

Board member Kelvin Edwards offered to Rev. Webb and a two or three constituents from “Save Our Schools” who were still in attendance to have them meet with the three board members who were not in attendance at the informal January meeting.

Webb initially refused that invitation due to the fact it was nearly 10 p.m. at night and offered to meet the board any other time in the future.

The board offered to have a special called meeting about the matter later in the week.

After much discussion, Webb and a few of the constituents did agree to meet with the three board members.

On Wednesday, the board announced it had scheduled a special called meeting to be held Thursday beginning at 5:30 p.m. A closed session will follow open session.