“The demographics here are similar to Washington County so I feel very comfortable and at home here,” he said. 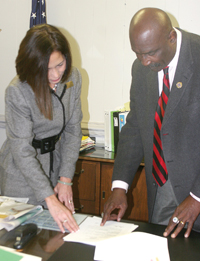 Walker began his post January 30 and has agreed to stay through the end of the current academic year in June. He said during that time he intends to continue working for the students as he did during his 42-year career.

“The first thing we do is put children first,” he said. “Then we work to provide a climate and culture where children can learn.”

The new school district leader said he felt many of those things were already happening in Hertford County and that made it much easier to work in the district.

“They have some academics that are great and processes that are in place,” he said. “They have on-going professional development. I can see why they have made such gains in the last several years.

“They are working smarter and you can tell from the results they are getting,” Walker continued. “There is still a ways to go, but they have made incremental gains and that’s crucial.”

Walker said Hertford County Public Schools was a data-driven district and that is necessary for success. He said the key is to use that data to help make the growth that is occurring in the system.

Since replacing former Superintendent Dr. John Fahey, Walker said he has been warmly welcomed to the district.

“They’ve treated me very well,” he said. “When you’re coming into a new territory, that concerns you, but they have been very welcoming here.”

“As a leader, I want to be approachable,” he said. “I have always had an open door policy. This is a people business.”

Walker said he believes his experience in education can be an asset to Hertford County Public Schools over the next several months.

“I think with my expertise I can provide leadership,” he said. “I believe I can help continue to move the school system forward.

“I believe in setting expectations and we will be all about children first,” he added. “I want to continue to lead in the direction the district is going and I believe my leadership style will do that.”

Walker said he was also a person who was open to suggestions and that he would listen. He said he hasn’t arrived on the scene to make sweeping changes.

“I know good education when I see it,” he stressed. “I know this school system has it.”

He said that means the goal will be to continue to raise the bar when it comes to state assessments.

Walker stressed that he will not take the interim title to just sit in an office, however, but will be actively involved in making the district even better than it already is.

“I am here to do a job just like I did in Washington County,” he said. “I’m not here just to be here.”

Hertford County Public Schools is currently advertising the superintendent vacancy and plans to have a permanent replacement for Fahey by July 1.

WINTON – The Hertford County ABC Board has two new members and a new directive from the county commissioners. At... read more