The Rev. T.O. Nixon officiated, and music was by Travis Alexander, organist, and Rachel Oliver-Cobbin and Carlton Sturdivant, vocalists.

Given in marriage by her parents, the bride wore an off-white Pronovias A-line gown with horizontal ruching on the bodice and waist, and gathers on the right that flowed into a chapel-length train. Her bodice was accented with a small v-notch and beads, and her elbow-length veil featured pearls and crystals.

Derrick Pierce of Charlotte, cousin of the groom, served as best man. Groomsmen were Eric Felton of Richmond, Va., Lamond James of Camden, Chauncey Dameron of Bertie, and Rafi Sims and Kevin Leonard of Raleigh. Ushers were Arthur Brodie of Mebane and Kenta Everett of Raleigh.

Ring bearer was Zephaniah Gattis of Mebane, nephew of the bride, and flower girls were Kennedy Frink and Jourdin Frink of Greensboro, goddaughters of the bride. 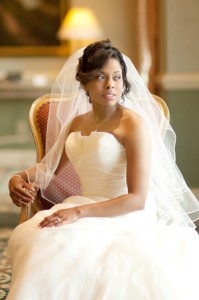