RALEIGH – Just hours after North Carolina Governor Bev Perdue stunned the political guard by announcing her intentions on Thursday not to seek reelection, the state’s second-ranking official said he will run for that office. 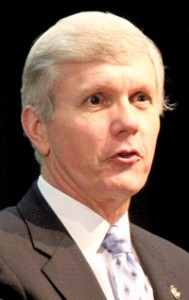 “Today, I’m announcing that I am running for Governor. Lucille and I love this state and we understand tough political races. I am the only candidate who has run and won statewide and I look forward to waging an aggressive campaign. Elections are about choices. As a state we must decide the direction in which we will turn. With this campaign, I choose to look ahead to a brighter future.  I choose progress.  I choose a future where public education is the foundation of our economy.”

He added, “I believe that our future economy and better jobs depend on our historic commitment to education. After all, education is in North Carolina’s DNA – it’s what sets us apart and it’s what will determine our future. However, you can’t make progress if you are pointed in the wrong direction. Pat McCrory and the Republican leadership are facing the wrong way by cutting teachers, reducing scholarships and abandoning economic development. They are doing lasting damage to our state. I’ve dedicated my career to improving education at all levels and making North Carolina a great place to do business.”

Dalton is no stranger to the Roanoke-Chowan area. On Jan. 12 he served as the keynote speaker at Turner Auditorium on the campus of Chowan University, the site of the Town of Murfreesboro’s official 225th birthday celebration. In November of 2010, Dalton met with eastern North Carolina leaders as part of an economic development roundtable forum held at Roanoke Electric Cooperative’s main office near Ahoskie.

Prior to Dalton’s election as lieutenant governor, he served six terms in the North Carolina Senate. Among Dalton’s achievements in education are helping to reduce classroom sizes, bringing accountability back into classrooms and increasing teacher pay. He authored the Innovative Education Act and created the state’s early college system. Dalton has also been a supporter of economic development, affordable healthcare and protecting the environment and natural resources.

Born in Rutherfordton, Dalton graduated from the University of North Carolina at Chapel Hill with a B.S. in Business Administration and a law degree. He built a successful law practice and has been deeply involved in the community. Lt. Gov. Dalton is a lay speaker in the Methodist church, a former Cub Scout leader, and served as board chair of the local community college.

Lt. Gov. Dalton is married to Lucille Hodge Dalton, a former teacher and member of the Rutherford County School Board. In 1998, she was named North Carolina’s school board member of the year, winning the Raleigh Dingman award. Walter and Lucille have been married for the past 37 years and have two children, Brian and Elizabeth.