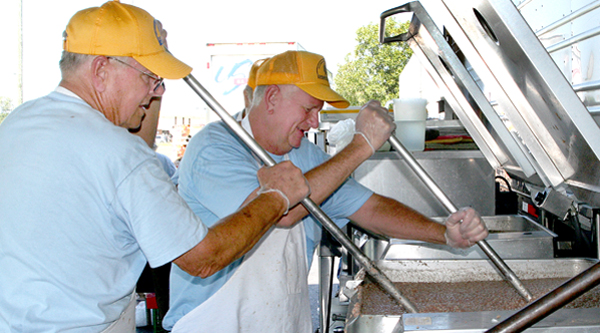 Six years ago, Hurricane Katrina slammed into the Gulf Coast states destroying homes and businesses and killing more than 2,000.

Williamson with Mississippi Baptist Men’s Ministry Disaster Relief remembers that 2005 disaster as well as those who came to help.

“North Carolina (Baptist Association) came and they stayed in Mississippi for approximately two years,” said the Maben, Miss. native. “A lot of the volunteers are here because they helped us, we want to help them.”

So when the call came from the North American Mission Board requesting the Mississippi Baptist Men’s Ministry go to North Carolina for disaster relief, the call was answered.

Since Tuesday, the parking lot at the West Chowan Baptist Association office near Ahoskie has been buzzing with Hurricane Irene relief activity from the Mississippi team and those with the American Red Cross.

The two entities joined forces to bring hot meals to those residents of Hertford, Northampton and Gates counties still without power.

“The Baptist Association is preparing the meals for us and we’re putting it on our ERV (Emergency Relief Vehicles) trucks to go out in various areas to see the clients who are in need,” said Elaine Stephens with the Greater Carolinas Chapter of the American Red Cross, which is based out of Charlotte. “We’re trying to get to the ones without power and everything; we’re trying to get it to those locations so they can have a hot meal.”

Stephens said in Hertford County there are four feeding stations set up where volunteers deliver meals to those in need from the ERVs.

“Everybody else is mobile, they are driving to different areas and streets,” she said. “People make an announcement that we’re there and they come to the truck to receive their food.”

Williamson said 8,000 meals had been prepared in two days by the Mississippi Baptist Men’s Ministry feeding unit operated by 18 volunteers who often have workdays that begin at 4:30 a.m. and last until 9 p.m.

On Thursday, Williamson expected the team make 7,500 more meals in their mobile kitchen that boasts 40-gallon tilt skillets as well as convection ovens. The unit is self contained, meaning it has its own water and treatment system.

“We can come in, set up and be preparing food in about six hours,” Williamson said. “We have everything on our unit to set up and start serving food as soon as we arrive.”

Williamson said volunteers are attracted to the Mississippi Baptist Men’s Ministry simply because they want to help.

“The number one thing is the love of Jesus Christ that they have, (and) because of that love they have they want to help people other people in need,” he said.

CONWAY – For one Northampton County family, Hurricane Irene was the least of their worries. Other than being forced to... read more