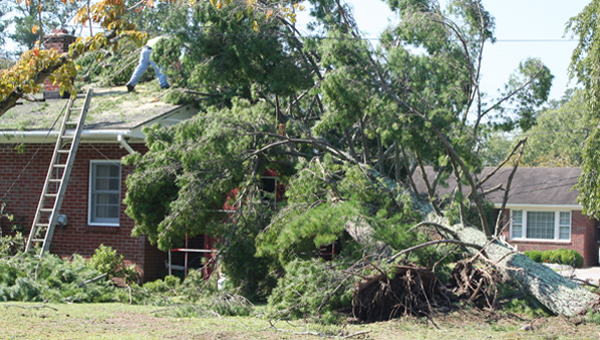 Tree damage from Hurricane Irene is noted throughout the Town of Murfreesboro, including this one on Spring Avenue. Staff Photo by Amanda VanDerBroek

MURFREESBORO — Tree-lined streets proved to be hazardous as Hurricane Irene pushed through the area Saturday.

On Sunday morning, Murfreesboro citizens rose to find numerous trees down in their neighborhoods causing power outages all over town.

Many trees in the Lakeview Drive area were toppled during the second half of the storm as strong winds moved in.

A tree fell onto a home and storage shed located off Spring Avenue causing damage to the home’s roof. Another house on Third Street suffered some damage from a large pine that fell onto its porch.

Karen Downey, of Franklin Drive, said she started getting nervous as the winds picked up during the night. Downey’s home is surrounded by large pines and on Sunday she was clearing her property of tree limbs and branches.

Downey was originally going to ride out the storm at a friend’s house in Pendleton, but as the storm lightened a bit in the afternoon they decided to seek out a restaurant for dinner.

After the meal, Downey’s friend dropped her off at home as they both thought the worst of the storm was over. But then Irene’s winds moved in.

“These pine trees I was afraid were going to land on me,” she said of her Saturday night experience.

Downey was fortunate as her home and property were spared during the storm.

After witnessing nature’s ugliness, Downey also saw some of its beauty. She said around 1 a.m. Sunday, after the storm had passed, she opened the front door to check on her cat. She then took a moment to admire the clear sky.

“The stars were beautiful,” she said. “You could see every one of them up there.”

Damages exceed half a million in Bertie Co.

WINDSOR – Clean up is going well in Bertie County, but the cost of Hurricane Irene could be devastating. Bertie... read more