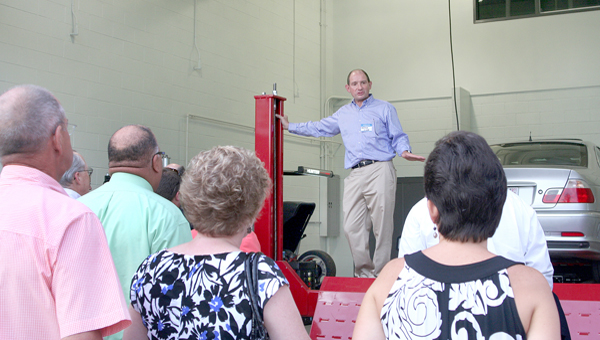 Simon Cobb (facing camera) leads a tour through one of the client garages at the North Carolina Center for Automotive Research, the site of last week’s Northampton County Chamber of Commerce Annual Meeting. Staff Photo by Amanda VanDerBroek

GARYSBURG — Perhaps the best way to grasp the reality of the North Carolina Center for Automotive Research (NCCAR) is to see it for yourself.

Last Thursday, those from the business community in Northampton County received the chance to witness first hand the innovations at NCCAR.

Simon Cobb, NCCAR Chief Operating Officer, served as the event’s guest speaker. Cobb gave guests an overview of NCCAR and the new features that are up and running at the automotive testing facility.

“This (NCCAR) is quite deliberately a little bit of a secret because we don’t advertise or broadcast this facility primarily because there’s confidential work that takes place here,” he said.

The “work” Cobb referred to takes place within NCCAR’s sprawling 600-acre tract, which includes a current two-mile testing track (attendees were welcomed to take a “slow and methodical” lap around it later in the evening) and a modern Operations and Engineering building.

The facilities features were designed in line with market research in 2006.

“What we’ve been able to do of the 620 acres, we’ve developed 165 acres, approximately a quarter of it is developed,” Cobb said.

Within the Operations and Engineering building are offices and conference rooms for clients. The facility also features client garages. Cobb noted some of the equipment in the garages were purchased with the help of the Golden LEAF Foundation.

NCCAR is covered by several cameras, allowing Cobb and Site Superintendent Sam True to access the video feed from laptops. Cobb said the bandwidth for the WiFi IT infrastructure has been tested and with a vehicle driving at 50 miles per hour on the track they can get 19 megahertz per second.

Cobb said along with the purpose of the facility another staple at NCCAR is safety and security. Protocol safety measures and driver procedures are in place to protect those who utilize the facility.

“The potential for things to go wrong here is very, very high,” he said. “We’ve had vehicles traveling 175 miles per hour on that track.”

“It means we can operate large groups quite safely,” he said.

The Chamber’s First Vice President Brian Bolton spoke about the upcoming 4th of July Spectacular the organization has scheduled for 5 p.m. at the Northampton County Cultural and Wellness Center in Jackson.

“Hopefully this will be an annual event,” he said.

The celebration will include bands Willie Peebles and The Mighty Saints of Soul and food for purchase from non-profit groups. The night will be capped off with fireworks.

Bolton also spoke about a fundraiser for which tickets are being sold for a “Fall Get Away” to Sandpiper Cay Condos in Kitty Hawk in September. The trip is limited to 200 people. Call the Chamber at (252) 534-1383 for more information.

Jackson Mini Shops and owner Nell Martin was honored as Business of the Year. Chamber Executive Director Judy Collier said Martin was not able to attend due to another engagement.

Woodland was named as Municipality of the Year. Woodland Town Commissioner Sidney Joyner accepted the award on behalf of the town.

The chamber welcomed new officers and a board member at the meeting. Bolton will serve as President and First Vice President for the upcoming year as there were no nominees for the latter. Second Vice President will be Chris Vincent, Secretary Betty Lou Barnes and Treasurer Jim Gossip. The nomination of Robert E. Wilkins of Jackson to the Chamber’s Board of Directors was also approved.

AHOSKIE – “It’s not the destination, but the journey.” The long-standing motto of the Immanuel Kings Mentoring Program continues to... read more