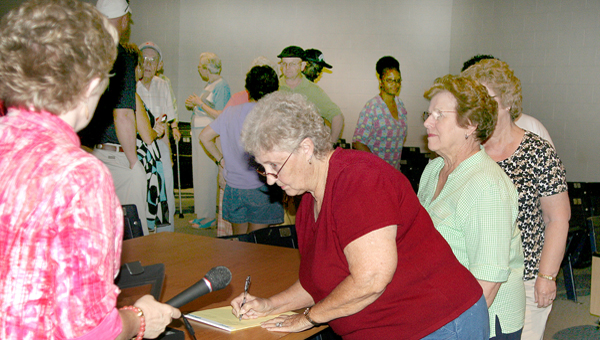 CONWAY — Many residents of this town seemed to have left Conway Middle School with more questions than answers in regards to their hometown post office.

On Wednesday evening, approximately 70 citizens attended a town meeting organized by Conway town officials to get answers and reasons for pending changes at the Conway Post Office.

In all, nine citizens and local officials expressed their concerns, frustrations and questioned the changes during the public portion of the meeting which allowed participants to speak for five minutes each. In addition, citizens were also invited to sign a petition against the operational changes.

According to Julius Jones, post office operations manager for the area who attended the meeting, the two mail delivery routes in Conway will be moved to the nearby Murfreesboro Post Office. This change means the mail truck that travels from Rocky Mount to Woodland, Potecasi, Conway, Pendleton, Severn, Como and Murfreesboro will eliminate Conway from its morning mail delivery stop. However, outgoing mail will still be picked up in the afternoon.

Instead the mail for the Conway Post Office and its residents will be dropped off in Murfreesboro and then transported by either carrier or contractor to Conway. Another change involves carriers from the Conway Post Office who will report to Murfreesboro, and those postal employees in Murfreesboro will need to receive training in order to learn how to handle the mail from Conway. The modifications will reportedly result in an annual savings of $7-8,000.

But, according to Jones, the change will be “transparent” and will not impede on mail delivery or outgoing mail.

“The changes we’ll be making are internal, it won’t affect delivery; this office in Conway is not going to close, you’re still going to be able to come to the post office and pick up your mail,” he said. “We’re having to make the changes because we are like any other company, the post office is losing billions of dollars through technology—the texting, the tweeting—it’s having a huge affect on post office operations.”

Jones added the United States Postal Service (USPS) has done a great job of not laying off employees and in order to continue doing this, adjustments had to be made.

He said there are some transportation issues that need to be sorted out before the changes are implemented.

“My understanding is that the mail truck (from Rocky Mount) will not stop in Conway and the mail will be delivered to Murfreesboro,” Hester said.

“The transportation schedule for the morning trip, yes, will go straight to Murfreesboro,” Jones answered.

Jones added later that the afternoon stop to the post office for outgoing mail will remain the same.

Hester questioned the safety of clerks transporting mail in their vehicles to the Conway Post Office.

Jones said that it was not an issue and that is how rural carriers deliver mail each day.

“To add to that, I was just in a meeting today and it is a possibility that they may get a local contractor, they may hire someone and give them a contract to transport that mail from Murfreesboro to Conway in the morning,” he said.

“If the truck is going through Conway, why can’t it not stop in Conway,” asked Hester.

“That, again, is to cut costs, for every transportation schedule that we stop, it’s thousands of dollars that we save,” Jones said.

Jones said the Conway Post Office was identified as where the savings could be made.

“They could always put that contract back in, but initially, they have already figured out what they can save by not having that one stop,” Jones said.

Hester questioned how much mail the Conway Post Office handles.

Jones said he did not know, but the impending changes would not have an affect on what time residents would receive their mail.

Hester noted that the changes were being made for cost measures, but the Conway Post Office financially operated in the black while others in the area did not.

“We’re not in the business to make a billion dollars a year, we want to break even every year,” responded Jones. “But to answer your question, yes, I believe Conway is on budget, year to date.”

Jones said he wanted everyone to realized how technology was impacting the USPS.

Hester asked what would happen if a package or certified mail was being delivered on Saturday and the Murfreesboro Post Office is closed on Saturday.

Jones said those who had to pick up packages or certified mail would still come to the Conway Post Office.

“You’re not going to have to drive to Murfreesboro, those packages, certified letters, registered letters, will be brought back to Conway by the carrier or contractor,” he said.

Jones said the Conway Post Office would remain open from 9 to 11 a.m. on Saturday.

After further discussion, Hester asked Jones to understand why there were so many questions and the problems the route changes may create.

“We can’t understand why the truck will ride by Conway, where it’s going to cost a whole lot of money for him to get out of his truck, put that bag of mail on the floor of the post office, and go off down the road,” said Hester.

Jones said the USPS was looking at it from a cost perspective.

“Everything now is about savings, cutting costs, in order to provide the same service to the community,” Jones said. “We don’t want to make changes that are going to have an impact on the community.”

Hester said the Northampton County Board of Commissioners voted and sent a letter to government officials urging them to investigate the matter and see what can be done.

Jones said the district manager had received a copy of the letter and they were aware of it.

“I think what we’re assuming is the truck comes through Woodland, up (N.C.) 35 north, basically come up pass Potecasi, through Milwaukee, past Conway, and Pendleton, Severn, and that’s the question here,” he said. “If it’s going to go right down the same street the post office is on why is it not going to spend 15-20 seconds there to drop off a bag.”

“The way that this contract is laid out, every time a contractor stops at a (office) there is a cost,” responded Jones.

He added there are still different studies being done on post offices across the country.

Bolton opened the floor to citizens who had questions and concerns.

Billy Futrell asked how much the USPS would be saving by eliminating the Conway delivery stop.

Ted Sumner questioned if the addresses would changed to Murfreesboro.

Sumner took issue with a contractor being hired to take the mail from Murfreesboro to Conway.

“I’m not a very smart business man, but please explain to me how can you hire someone to bring mail from Murfreesboro and cheaper than that man driving by the post office in Conway,” he said.

Jones said it was a good point, but initially it would start with the carriers, but if service was to be impacted the contract would be put back in.

Rev. Willie McLawhorn asked with Conway being down graded in status, if the Murfreesboro Post Office status will increase.

Jones said he didn’t believe it would as the two additional routes the post office would be taking are rural routes and, according to the point system the USPS adheres by, there are differences between city and rural routes.

“There are a lot of factors that go into (the status of the post office),” he said.

Ken Brown suggested not stopping at other area post offices on the mail truck’s route.

“That’s a good point, I’ll make a note of that and give it to my boss,” said Jones.

AHOSKIE – Sarah Hackney has played three sports during her prep career at Ridgecroft School. While she was a standout... read more