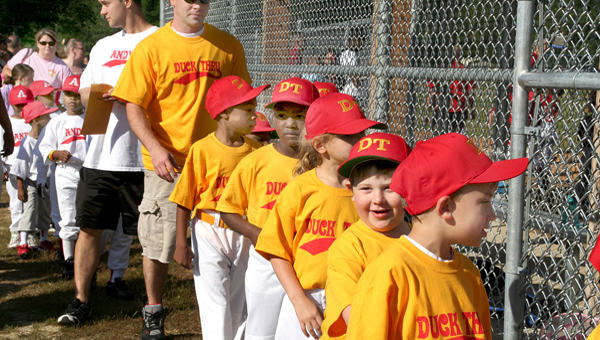 Players from Duck-Thru and Andy’s were among those recognized during Saturday morning’s festivities that officially opened the three new baseball/softball fields at the Ahoskie Creek Recreational Complex. Staff Photo by Cal Bryant

Throughout the Town of Ahoskie’s tedious process of turning tragedy into triumph, municipal officials vowed to breathe life back into a neighborhood that was wiped out nearly 12 years ago by the floodwaters left in the wake of Hurricane Floyd.

Judging by the laughter and smiles on the faces of young and old alike here Saturday morning, that promise has been fulfilled.

The Town of Ahoskie officially christened its three new fields at the Ahoskie Creek Recreational Complex during opening day of the youth spring/summer baseball/softball season. In excess of 400 young ballplayers lined the edge of the outfield grass at one of the fields, the brilliant color of their uniforms highlighted by a picture-perfect blue sky.

“This is so impressive; I wish you could stand here where I’m standing and see this; this is the best seat in the house,” said Ahoskie Mayor Linda Blackburn as she stood near home plate of Field #2 to address the large crowd gathered for opening day.

“I’ve heard over and over people say that they can’t believe this (the beauty of the new park and ballfields),” Blackburn noted, adding that Ahoskie can relate to the destructive nature of the recent storms throughout the southeastern United States. “Years ago we saw all the destruction here and now just look, it can be rebuilt.

“I hardly come out here without crying,” the Mayor continued. “It was so sad what happened here years ago. We remember that; we remember those that once called this land as their home. Throughout the process of rebuilding here, we’ve kept in our minds and in our hearts those that lived here. While we were not allowed to rebuild houses here, we did the next best thing and that was to bring back life here; bring back activities that families can enjoy. We look forward to years and years of joy and happiness here.”

A plaque now standing in-between the three fields bears the same message – “Dedicated to the Lives and Families Disrupted by Hurricanes Floyd and Isabel – From Chaos and Destruction Comes Laughter, Joy and Happiness.”

Pritchard noted that not only did Saturday mark the opening day of the youth baseball/softball season, it was also the first time the new fields would be put to use. To mark this historic occasion, three local men were chosen to throw out the ceremonial “first pitch” at each field – Tommy Umphlett, Jerry Harrell and Buddy Terry.

Umphlett spent 21 years playing professional baseball, first with the Boston Red Sox organization in 1953. Harrell has spent the past 30 years coaching youth baseball in Ahoskie while Terry has coached locally for 20 years.

“We wanted to honor these men for their support, their work with our young people and the community over the years,” Pritchard said.

Following the respective “first pitch” ceremonies, it was time to “Play Ball” as the youth teams began their 2011 season, one that will last through July.

The Ahoskie Creek Recreational Complex, which includes the previously opened Ahoskie Amphitheater as well as two soccer fields, encompasses 74 acres at the western end of Memorial Drive. The new ballfields came with a $1.45 million price tag. The entire complex is valued at over $2 million, with some of those funds coming byway of grants. Plans are in the works to expand the complex to include a walking trail, splash (water) park, dog park and a parking lot.

The town began looking for ways to use the property after it came into their possession following the FEMA buy-out from Hurricane Floyd. Town officials saw a need for a park and in 2005 worked with East Carolina University to develop plans and design. The park’s master plan was completed in 2007.

From that point forward, the town was able to secure a CAMA (Coastal Area Management Act) grant to purchase additional property for the park that wasn’t part of the FEMA buy-out. Another grant from CAMA plus $500,000 from the North Carolina Parks and Recreation Trust Fund as well as money committed from the town’s coffers has moved the project to its current point.

Courtney Byrum (left) is joined by Sharon Tann as they place toys, donated by the U.S. Marines, inside a vehicle... read more