‘We will bounce back’ 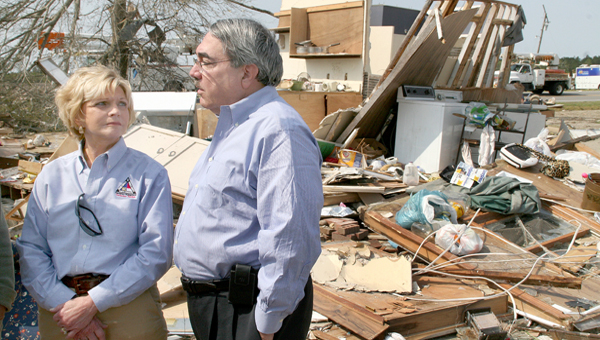 COLERAIN – The cavalry has arrived.

On Tuesday morning, North Carolina Governor Bev Perdue saw first-hand the devastation caused by two tornados that ripped through the heart of Bertie County on Saturday.

Joined by other state officials as well as U.S. Congressman G.K. Butterfield, the Governor observed the destruction from the air as the state-owned helicopter made several passes over the Colerain area.

Once on the ground, Perdue, no stranger to the wrath of Mother Nature when residing in New Bern, said she had seen the effects of a hurricane, but this was so much different.

“You don’t see this type of devastation with a hurricane,” she said. “Homes are shattered and spread everywhere. We don’t normally deal with these types of storms and their aftermath here in North Carolina.”

The next step, she said, will be working with the U.S. government to gain federal aid.

“This is a hard-pressed county economically and then you look around and see the losses they have suffered. It will take a tremendous faith to overcome…that faith is here,” the Governor stressed. “There’s a deep sense of family and community pride here as well as across North Carolina. We will bury our family’s losses, we will mourn for them and for others experiencing the same type of personal loss, but we will bounce back.”

“The President told me whatever it is we need, the federal government will come to your assistance,” Gov. Perdue stated.

She added that federal assessment teams arrived in the state on Monday and will begin to fan out to the affected areas.

“We hope by Thursday that we’ll have the first rough estimate on loss of property, both individual and business,” Perdue said. “I have every reason to believe that we’ll see an expedited federal declaration of an emergency, which means that very quickly we’ll have an assistance center set up in each of our affected communities. I believe the federal money will be there.”

Rep. Butterfield said this was the worst devastation he had ever seen.

The Congressman said it will take a partnership between government entities, the private sector and non-profit organizations to help Bertie County get back on its feet.

“It’s our job to help these people rebuild what is lost,” Butterfield concluded.

It was noted on Tuesday morning that short-term assistance is on the ground in Bertie County with the Baptist Men and America First teams working the local area as well as the American Red Cross and others. The real need is for long-term assistance for these storm victims, especially housing, prompting one state official to reveal that a plan is currently in the works to address that need.

“The preference may be to rent, but there’s so little rental property available,” the Governor said.

Lamb also noted that agricultural debris is a problem. “There’s debris everywhere; it will take a lot of time to remove all this from the fields and from the roadside once the clean-up process begins in earnest,” he said.

The governor suggested using prison labor to help with the clean-up effort in the fields.

“We usually have hurricanes resulting in crop loss…this is different, this is where the debris in the fields is preventing the farmer from planting,” she said.

Bertie Sheriff John Holley said during his numerous visits to the storm victims he was pleased to hear a resilient spirit.

“Sure, there are those who are saddened by the loss of life of their loved ones, but, generally speaking, our citizens are in high spirits,” Holley noted. “For so many of our citizens, everything they worked so hard for over the years is gone, but they are strong people…they will build back.”

“That’s the spirit across this great state,” Perdue stressed. “They are first thanking God that they’re alive. Then there will be a rebirth, communities will clean up and rebuild. That’s the spirit of North Carolina.”