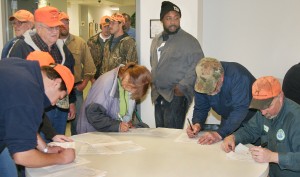 Those wishing to make public comments at Tuesday night’s meeting in Jackson are shown here filling out the required paperwork. Staff Photo by Amanda VanDerBroek

JACKSON — From the strong family tradition of hunting to the alleged destruction of property, both spectrums of the hunting dog topic were debated here Tuesday evening.

More than 100 people packed the seats and lined the walls of the auditorium of the Northampton County Cultural and Wellness Center, creating a sea of hunter orange baseball caps.

The Northampton County Board of Commissioners decided to hold the informational meeting after citizens appeared before the board to voice their concerns about deer hunting with dogs.

More than a dozen speakers at Tuesday night’s special meeting took to the podium to give their comments on the matter, including NC House Representative Michael Wray.

Two petitions were submitted by NC Sporting Dog Association lobbyist and lawyer Henri McClees to the commissioners to protect deer hunting with dogs. One petition contained the signatures of 68 farmers who own a total of 60,780 acres of farmland in the county and the other included 1,403 names of citizens supporting hunting with dogs.

Before the meeting began, County Manager Wayne Jenkins set ground rules for the speakers who each had three minutes to to address the board. He also noted there would be no decisions regarding the matter at the meeting.

Most of the public comments were in favor of those who hunt with dogs. The speakers highlighted positives about that form of hunting, including that it was a longstanding family tradition in Northampton, it keeps the deer population in check and has an economic impact on the county.

Arthur C. Grant Jr. said he didn’t want to see anything happen to dog hunting in Northampton County, noting the deer population would probably double in one year.

Grant, a member of the Army, currently resides in Ft. Bragg and hails from Rich Square. He has 33 years of dog hunting experience and credited the sport for giving him an outlet.

“I grew up deer hunting with Cumbo Hunting Club, it kept me out of trouble and to this day I still take my son and kids in the neighborhood,” he said.

Grant said hunters can’t control where their dogs go in the woods, but those that purposely turn their animals loose on private property are trespassing and should be penalized.

“I leave for Afghanistan again in a few more weeks and for me to come home after one year of defending the freedom and liberties of this country, again, for someone to tell me I can’t run my dogs on my own land—it’s unpatriotic in my eyes,” he concluded.

Mark Glover of Seaboard also said deer hunting had been a big part of his life.

“I grew up dog hunting and that’s just a community thing and everybody can participate in that,” he said.

Glover said there are few signs of hunters purposely turning their dogs loose on other property owner’s land.

“Dogs don’t read signs and if they cross your land they don’t stay very long, and they certainly don’t run every deer off of it,” he said. “We own land and other people hunt around us and their dogs come across our land, I don’t see where it bothers anything. To take dog hunting away from us would be a step back for this county.”

For Howard Davis Jr. of Faison’s Old Tavern deer hunting with dogs is a sport enjoyed by many generations of his family.

“I’ve enjoyed it all my life, my son enjoys it, to me that’s worth fighting for,” he said.

He concluded he wanted the kids in Northampton County to grow up enjoying the sport like he and his family have over the years.

John Robert Brady of Jackson asked the commissioners and the audience to consider economic impact the sport has on Northampton County. Brady is the secretary of Mt. Carmel Hunting Club.

“I know the hunting club gives back two times fold in Northampton County annually,” he said.

“We believe landowners would lose income, because without the support of people coming into Northampton County the income of the land would decrease,” he said.

Brady said the club uses tracking collars and tries to retrieve all of the dogs at night and places them in a pen before going home.

“It’s also been said that (hunting with dogs) has become a nuisance to people who like to still hunt,” he said. “I know it’s a burden on them to have to put up with dogs tracking, but unfortunately clubs cannot control dogs where they track.”

Brady added both dog and still hunters needed to respect one another.

Jasper Carroll spoke about the impact on farmers if the sport were banned.

“Northampton County is primarily a farm community and if dog hunting were banned it would cause the deer population to rise,” he said. “This in turn would cause a lot of crop damage and a lot of revenue would be lost.”

Among the crowd of hunters, there were those that didn’t want hunting dogs coming on their land and felt their property rights were being violated.

Errol Flynn of Conway had suggestions for those that hunt with dogs. He urged hunters to have respect, not to turn their dogs out on other individuals’ land and catch their animals at the neighboring property line. Flynn said he chooses to still hunt now, but used to run dogs for the sport himself.

“You have to pay to play; you have to either have permission to hunt or you have to have a lease to hunt,” he said. “You don’t go over to your neighbor’s (property) and turn dogs loose.”

Lynn Kinyon of Vultare said she has a problem with hunting dogs coming on to her property and wanted to see hunters be more responsible.

“I have a dog, but I have to keep her penned up,” Kinyon said. “She can’t run because it’s a county law, you have to keep your dog on your property.”

Kinyon said she has been awakened in the middle of the night by hunters searching for their dogs and the hunting dogs that often come on her property are hungry and bony.

“I think there has to be some kind of law and responsibility,” she said. “Some one is not taking care of these dogs, but I have to take care of my dog and I have to keep her penned up and it’s not fair to her.”

George and Aurora Grimes of the Conway area also spoke out about their experience with hunting dogs and hunters coming onto their property without permission.

“I’ve been intimidated and run off my own land in the past 35 years that I’ve owned it,” Mr. Grimes.

Mrs. Grimes said she believes the hunters should have more control of their dogs and not hunt where they don’t have permission.

“When you’re told there is no hunting on our property I don’t know why you don’t want to leave,” she said. “And you threaten us with your guns, of course, loaded.”

Rep. Wray said as a hunter and landowner he understood the speakers’ concerns.

“You called me, I answered; you emailed me, your concerns are my concerns,” he said. “I know how much my boys love to hunt.”

Wray said the meeting is what democracy is about and everyone had an opinion.

MURFREESBORO – It was the same as a heavyweight boxing fight. Chowan University and Shepherd University did nine rounds (innings)... read more