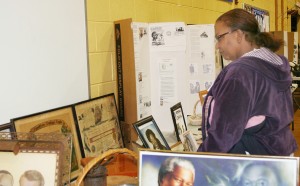 MURFREESBORO — For those that gathered here Saturday, the African American Festival offered music, dancing, face painting, vendors and a slice of history.

Jenkins said she wished more people attended the festival that is in its 13th year. Jenkins makes an effort to come each year and this time she brought her grandchildren.

Jones said it is important to observe African American history and culture throughout the year and not just February, which is traditionally Black History Month.

“(The festival) shows African American history can be celebrated more than one month out of the year,” she said.