While one local team began their playoff experience, another was beginning what they hope is a run to a state title. 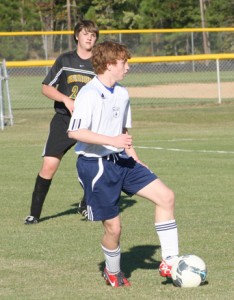 It was Lawrence’s first trip to the post-season in school history.

Rams’ senior Aaron Rock scored four goals, including a hat-trick of three in the first half.  Fellow senior Ryan Beggs had a pair of goals, two in each half; while juniors Michael Byrum and Drey Chrysostomou had a goal each.

Chrysostomou also had a whopping five assists while Byrum assisted on a pair of scores and Beggs chipped in on the other. Sophomore keeper Jordan Harrell got the shutout in goal, stopping two of the Warriors’ only three shots of the game.

“We did what we needed to do,” said Ridgecroft coach Aron Martin. “The first portion of the match we were able to move the ball around very quickly changing the point of attack and once I saw that I knew there was no need to go full-tilt the entire time.

“We got to rest some players,” he added, “and got to get some valuable experience to some players that may be called on later again in the playoffs.”

As they did in their regular season finale on Tuesday, the Rams scored early, putting up four goals in the first 15 minutes of the match.

Coming out with a running attack from first whistle, Beggs took a cross from Chrysostomou and powered it in for the first score and the rout was underway.

The Rams won the next ball and Rock displayed some of his marvelous dribbling wizardry, passing over to Chrysostomou, and back to Rock for another score and a 2-0 lead.

The same pair worked their magic twice more again in almost ballet-like fashion for two more goals and it was suddenly 4-0 as the crowd was just beginning to gather.

Ten minutes later, Beggs got his second goal of the half after Warriors keeper James Matthews had stopped a trio of Beggs’ previous attempts and made the score, 5-0.

Byrum and Chrysostomou also had attempts that Matthews turned away and the Rams maintained a five-goal margin at the break.

Byrum finally broke through with his first goal two minutes into the second half as Chrysostomou gained his fifth assist on the Rams’ sixth score of the afternoon.

Rock got one more goal before leaving the match with 20 minutes to play due to swelling in his ankle after he collided with young Warriors’ striker, Ryan Corbett.  Corbett was also shaken up on the play.

Chrysostomou closed out the scoring for Ridgecroft with a goal at the 50-minute mark and from there Martin substituted while allowing some of his defenders to play up in the midfield.

Cliff Matthews, Mason Hughes and Kelby Roberson attempted to get Lawrence on the board, but the Rams defense was too tough as a pair of shots were turned away while another went wide of the net.

“Lawrence battled hard,” said Martin, who received the Coastal Plains Independent Conference “Coach of the Year” plaque after the match.  “I’m proud that their program has made the progress to get to this stage in its development.”

“We made history,” said a subdued Lawrence coach Luis Giron, as he reflected on the bitter-sweetness of the moment.  “It’s an achievement building up the soccer culture (at Lawrence) and while it’s our first time here, I hope it’s not our last.

“We gained some good experience,” he added, “not just from this game, but from the whole season.”

Ridgecroft, who received the CPIC regular-season champions trophy after the match, raised their record to 18-1 while Lawrence ends their season at 5-6.

The Rams will now await the winner of the Davidson Day School – Wayne Christian match in their second round matchup Tuesday also at Bryant Field.

“We have to be two things,” said Martin, “hungry and humble.  That’s just the way we’ve got to operate.”

Looks like the wheels are coming off quickly at Richard Petty Motorsports. Not only did the organization’s top driver and... read more