Keep off the roads! 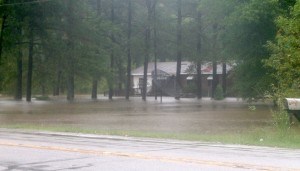 Residents at this home on US 13 south of Powellsville were seen packing up a few belongings and leaving for higher ground on Thursday morning.

It’s a mess out there.

Emergency response officials throughout the Roanoke-Chowan area are all saying basically the same thing this morning (Thursday)….stay at home and ride this out until the storm subsides.

A tropical system, merging with a low pressure area, has dumped up to as much as 10 inches of rain in isolated spots. As expected, this has led to a major flooding issue, resulting in several road closures and water threatening homes and businesses.

“No one has been evacuated as of yet, but there are a couple of areas that we’re keeping a close eye on right now,” Smith said.

Ahoskie was reporting flooding on 32 streets.

“Conditions are not conducive for traveling,” Smith noted. “If you don’t have to leave your home, I would advise staying put, that is unless your home is being threatened by floodwaters.”

Another area of concern was Tunis. That village, on the banks of the Chowan River, is prone to floods.

The Ahoskie Creek is overflowing its banks in the traditional areas, especially at Fretwell Farm on the Jernigan Swamp Road. Smith reported that Ahoskie Creek, at the NC 42 bridge (Ahoskie), was at 12.34 feet Thursday morning. It was at 17 feet during Hurricane Floyd in 1999.

“We’re still a day away from seeing the Ahoskie Creek at its highest point,” Smith noted. “Traditionally, it takes at least a day or two after the rain stops for all the water to make its way down the creek from the Rich Square area.”

An 18-wheeler jackknifed Thursday morning on an overwash on NC 561 west of St. John. Clean-up was still being performed at the accident scene as of 11 a.m.

Bertie County residents are being urged to stay put unless they are in imminent danger.

As waters rise throughout the county due to the torrential rainfall, Bertie County Emergency Management Coordinator Rickey Freeman is cautioning people about being on the roadways.

“Right now, unless there is water threatening your home, you are much better off staying where you are,” Freeman said Thursday morning. “The roads are starting to have water standing on them and being on the road is not safe.”

Freeman said he knew there were problems on such places as Center Grove Road in the Center Grove community, White Oak Road near Askewville, Brick Mill Road near Aulander and in the town of Aulander.

“We have some water standing on all of those roads,” Freeman said. “I’m sure there are many others, but we have reports of water as high as two to three feet on those roads so it is imperative that people stay off them.”

No shelters have been opened in Bertie County to this point.

“Right now we haven’t had anyone that has reported leaving their homes,” Freeman said. “There could have been some people who had to evacuate, but they haven’t reported it to Emergency Management so far.

“The problem with a shelter right now is that people would have to get to them and that could be just as dangerous in a lot of situations,” he added.

Freeman was already moving about the county to check on the safety of the residents and also to prepare an update on conditions for a state conference call for Emergency Management scheduled for 12:30 p.m. today (Thursday).

Bertie County Sheriff John Holley said his deputies had been patrolling the county throughout the night, but had not found anyone that needed to leave their home thus far.

“We were out throughout the night,” Sheriff Holley said. “Thus far, we have had no accidents in the county and no one who has reported a need to leave their home, but that’s so far.”

The sheriff said he also encouraged people to stay in and not be on the roadways unless it was absolutely necessary.

“We want people to stay safe and driving around in this storm is not the way to do that,” he said. “I would encourage everyone to stay where you are unless you feel there is danger to you and your family.”

That’s current situation for Northampton County with the copious amount of rain that has fallen over the Roanoke-Chowan region.

According to Northampton County Emergency Management Tim Byers, no evacuations or road closures are affecting the county as of Thursday morning. The county’s three primary emergency shelters are currently closed at the time.

Byers said there is limited flooding in the low-lying areas in the county, including Rich Square, the Jackson By-Pass Road area and Seaboard.

“Reports of a couple of trees that have fallen on roads are just beginning to come in,” he said.

Byers noted older trees are often susceptible to the wind and rain the area is currently experiencing.

“We’re still monitoring calls, thankfully there haven’t been many incidents,” he said.

Byers said there have been a couple of vehicle accidents without any serious injuries and reports of vehicles stuck in water.

“If you cannot see the road, that’s a good indication that you should not go through the water,” said Byers.

He added motorists to use caution while traveling on bridges and overpasses as their condition may be unknown.

“It only takes a couple of inches to move a vehicle,” he said.

Byers suggested everyone to stay off the roads until the storm passes.

“Use caution, don’t be on the roads unless you have to,” he said.

Byers said if you do head out bring a cell phone in case of an emergency. He added if your vehicle does stall out in water call 911 immediately.

Thus far, Gates County has faired well when compared to its other R-C area neighbors.

Emergency Management Director Billy Winn said there were a few roads covered with water, but most were passable.

“We’ve got a few trees down and some isolated areas without power,” Winn reported. “Other than that, we came out better than we first thought.”

Winn added that a report of a possible tornado near Gates Thursday night was perhaps just straight line winds.

“The wind knocked some trees down on Tyler Road, causing a vehicle accident, but the driver was checked out and was uninjured,” Winn said.

The wildlife boat ramp and parking lot at Shoup’s Landing, on the Chowan River at US 13, was under water.

“We’ve got the county petitioned off in blocks and have spotters – Sheriff’s deputies, the Forest Service and some volunteers – riding and keeping an eye on things.”