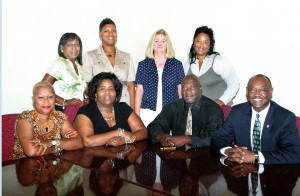 WINDSOR – The Roanoke-Chowan Domestic Violence Task Force has been helping victims for more than a decade.

Thanks to a new grant from the Governor’s Crime Commission, they will have the opportunity to help the victims of domestic violence in a more comprehensive manner.

In a press conference Wednesday at noon, the Honorable Judge Alfred W. Kwasikpui, chairman of the Task Force, announced the receipt of the grant and the group’s selection to participate in a study performed by the Z. Smith Reynolds Foundation.

“A couple of years ago, we wanted to start a Coordinator Community Response Team (CCRT),” Judge Kwasikpui said. “We applied for grants to sponsor the team.”

The efforts were rewarded when the Governor’s Crime Commission gave the Task Force $139,000 recently to develop and implement the CCRT.

Jaime Heckstall, the coordinator for the team, said the CCRT would allow the task force to learn more how to help victims of domestic violence.

“The purpose of the CCRT is basically to realize where there are gaps in service because we are in a rural area and have a lot of fragmented services,” Heckstall said. “There are also many who don’t realize the services that are available and one part of the project is community education to allow them to understand what is available.”

“We will be the first responder for victims when the 9-1-1 call comes in,” Heckstall said. “One of our advocates will respond along with law enforcement.”

The Domestic Violence Advocates will provide an assessment of the situation, help with referrals and aid the victim in any way possible.

Heckstall said there will be three teams, one each in Bertie, Hertford and one in Northampton counties.

“We will meet monthly to discuss cases and how they are handled,” she said. “We will see what services were provided and what could have been provided to make sure were are improving services.”

Two Victim Advocates have been hired to work 20 hours per week as part of the grant. Shirley Williams and Michelle Earley will each work in the capacity of an advocate for victims. Both said they had been touched by the loss of a loved one to domestic violence.

“It is a pleasure to work with victims and to be the voice for those who cannot speak for themselves,” Earley said.

She said she was happy to be aiding victims in receiving the services necessary for them to recover and to be there to support them.

Williams said she was glad to be working to help coordinate victim services from several agencies to make sure all levels of assistance are provided to a victim of domestic violence.

“One of my main responsibilities is to bring agencies together as a whole,” she said. “In coming together and meeting with all of the agencies in all three counties we can learn what we have to offer.”

“The CCRT is working on developing statistics and working with the Z. Smith Reynolds Project so we can build a larger community effort toward domestic violence,” she said. “We are also working to set protocols so that when we have a victim, that person doesn’t lack any service for that family.”

The Z. Smith Reynolds project is important for the Task Force because it has helped aid such projects as the Domestic Violence Offenders program, which began in 1999.

The program, in which offenders are ordered to take 26 weeks of classes, has been partially funded by the Reynolds Foundation.

“The Z. Smith Reynolds Foundation is doing a study in order to find out the effectiveness of the offender program and the CCRT,” Judge Kwasikpui said. “They will determine from the study whether or not to fund not only our district, but other areas.”

Judge Kwasikpui said the Roanoke-Chowan Domestic Violence Task Force was chosen because of the length of time the offender’s program has been in operation and the development of the CCRT.

Jo Liles, who serves as Director of the offender’s program, said the study was done because the Reynolds Foundation, like many in the country, is making sure they are investing their money wisely.

“They are making sure the money they are investing is being used in a productive way,” Liles said. “The study will show them what they are supporting and see if the grant is giving them benefits.

“We’ve been asked to participate and we’re excited about that,” she added. “We want to know where our program is working well and where it can be improved.”

The Task Force, including the new Advocates, is housed in the Day Reporting Center, which is under the direction of Michael Johnson.

Johnson said it was a good relationship because his clients could sometimes be referred to the Task Force and vice versa.

As the Task Force continues its work, board member Sheila Manley-Evans, who over sees the Domestic Violence Offenders Program, said things were going well.

WINDSOR – It wasn’t the opener the Falcons were hoping, but there were moments of brilliance here last night (Friday).... read more